Since I’ve got another book in the bag, this summer is all about readin’ and reflectin’.  I’ve never had a summer in which I was not engaged in writing a monograph for more than twenty years:  first it was a dissertation, then it was Abraham in Arms:  War and Gender in Colonial New England (which was not a revision of my dissertation, oh well. . . ), and then it was my forthcoming The Many Captivities of Esther Wheelwright.  And that about covers the previous 24 summers!

So what the heck am I doing with myself?

I’m giving myself the gift of just reading and dreaming about what might be an interesting project that will bring together my interest in women’s and gender history, sexuality, fashion, the body, and material culture.  I’ll be reporting here and there about what I’ve read and who else might be interested in reading what I’ve read too. 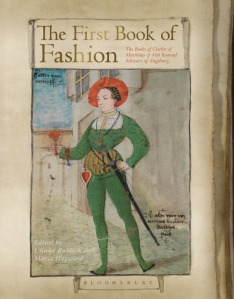 For example, I finally have had the chance to look over The First Book of Fashion:  The Book of Clothes of Matthäus & Veit Konrad Schwarz of Augsburg (Bloomsbury Academic, 2015), edited, translated, and with essays by Ulinka Rublack and Maria Hayward.  It’s nearly a coffee-table kind of book in terms of its size and production values.  I first heard about this book last winter via Twitter, which led me to Rachel Herrmann’s  fascinating interview with Hayward about fashions in the courts of Henry VIII and Charles II of England.

The First Book of Fashion is primarily a color reproduction of the books kept by father Matthäus Schwarz, an accountant for the Fuggers, and his son Veit Konrad Schwarz.  These books cover the period 1497 to 1561, and reproduce in full color (and with commentaries by each of the Schwarzes) several of the outfits they wore at different points through their lives.  They’re truly extraordinary, but what makes the book even more valuable are the introductory essays by Rublack and Hayward, and the extensive scholarly commentaries on each plate from an art historical and material culture perspective.  For a sample of what you’ll see inside, click here.

Furthermore, Costume designer Jenny Tiramani re-created one of the elder Schwarz’s outfits and describes the process in the book (including patterns!).  You can see the getup itself in three dimensions in the video in this link as Tiramani dresses model Jack Brotchie.  (Hold onto your codpieces!)  It’s a red and “vivid yellow” silk damask paned doublet atop red and yellow pinked and striped hose and a voluminous shirt gathered at the neck and wrists.

The First Book of Fashion is a great source for the history of childhood and youth in particular, but also for the study of age in general.  Both of the Schwarz men who created these books were fascinated not only by adult fashion, but also in documenting or re-creating their infancy and childhoods through the lens of fashion as well.  The first plate in Matthäus’s (the father’s) book is not an image of himself, but rather a portrait of his parents (and their clothing) when his mother was heavily pregnant with him!  Yes, his first “portrait” was of himself as a fetus still inside his mother’s body.

Veit’s (the son’s) book offers much livelier, more action-packed renderings of his childhood.  Sometimes these images offer not just a still, full-length image of himself (as his father’s book tends to do), but multiple action-shots of himself misbehaving, playing games, and/or in the company of nurses and other servants who are busy wrangling, spanking, or swaddling him.  These are some of the richest images in the book, showing not just multiple boisterous Veits in action and his clothing, but also some detailed interiors and streetscapes, in addition to the clothing and activities of the nurses and servants (whom he identifies personally and specifically.)  I would love to show you a sample, but none of these images are already available on the web, and I don’t want to run afoul of the book’s copyright!  But trust me:  they’re worth it for the sheer childish energy and naughty badness!

Anyone interested in early modern childhood and youth, boyhood, age, and masculinity in general really needs to consult a copy.  The two lives documented here cover 65 years of sixteenth-century history in Reformation Augsburg.  (That said, it’s an astonishingly secular document:  Matthäus Schwarz shows himself wearing a crucifix and appears to have been Catholic, but otherwise religion is subordinate to the thoroughly secular concerns of a fashion-conscious bachelor to age 41 accountant for the Fuggers, who are sometimes called “the Medicis of northern Europe.”)  Other scholars will find material to interest them as well:  labor and women’s historians may be interested in the depiction of women servants, nurses, and midwives, for example, and family historians as well.

Most of the presence on the web about this book highlights its interest for historians of fashion and material culture, but I think it’s important to highlight its uses for the study of childhood, youth, and age.  (Interestingly, in the Google image search I linked to above, none of the childhood and youth images that I described here are included, showing that it’s been overlooked as a source for the study of age, childhood, and youth.)

4 thoughts on ““And I did other bad, naughty things”: Source for the history of early modern childhood & youth”