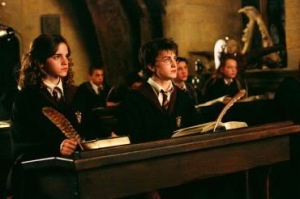 The always-thoughtful David Perry of How Did We Get Into This Mess and on Twitter @Lollardfish) has given his last blue-book, in class, timed exam.  Those of you who know his writing will not be surprised that he’s doing this because of the inequities and exposure in-class exams mean for students with disabilities:

I’ve been inching away from the blue book for years, but it’s time to go cold turkey and match my praxis to my principles. Whatever pedagogical gains the in-class test might bring — and I’ll argue they are few and increasingly less relevant — I can no longer justify forcing people with disabilities to disclose their conditions in order to receive basic test-related accommodations.

Although protections for disabled students date back to Section 504 of the 1973 Rehabilitation Act, the 1990 Americans with Disabilities Act spurred widespread change throughout academe. Compliance with the ADA and with Section 504 — for any institution receiving federal funds (including financial aid) — requires providing reasonable accommodations to students with diagnosed disabilities. It’s become routine, rather than rare, for students to begin the semester by presenting their professors with documented requests for accommodation.

That it’s become routine is great but far from perfect. Not only do students have to disclose disability to their professors —who are no more immune to ableism than to any other sort of bias — but the most common form of accommodation extends the disclosure to classmates. Many students with invisible disabilities (such as anxiety disorders or ADHD) require quiet rooms and extra time to work on a test. I’m thrilled to provide both. On the other hand, when the whole class gathers to take an exam, with one student conspicuously absent, everyone notices.

Right on, David!  (Be sure to read the whole article.)  He comes to his conclusion about canning the in-class, timed exams based on his understanding of the concept of universal design.  Perry explains, “That term — coined in the 1970s around architecture and public space —advocates that systems be designed to accommodate the widest range of function and ability possible. Universal design asks us to try and build accessibility into the fabric of our institutions and culture, rather than wait until individuals make their needs known.”  I’m sure you’ve seen evidence of it in buildings of recent construction–the extra-wide doorways and hallways, the paddle-handle door pulls that have replaced traditional doorknobs because they don’t require the number of fine motor skills to operate.

I don’t think I’ve given a blue-book, in-class exam since maybe 2005 or 2007.  Even then, I only did them in my large survey courses.  Quite frankly, my reasons were somewhat selfish (who wants to read all that bad handwriting? Also, making special arrangements with the office for student disabilities was extra time and attention I didn’t always feel that I had at the end of the semester.)

But there were also pedagogical reasons, too.  I reflected on my experience of writing blue-book exams and of writing research papers or take-home final exams.  Whereas I still remember (nearly thirty years later!) the subjects and the findings of research papers and other substantial intellectual projects I wrote in college, I have no memory of any blue book exam I ever wrote.  None–and I’m the kind of dork who actually loved taking exams, who loved writing furiously for two hours, knowing that I was absolutely crushing the subject.  Loved it!  I probably learned something along the way too, like how to prepare for a two-hour in-class timed blue-book exam, but I’m not sure what else.  (I have vague memories of being very impassioned about the Federalist Papers at one time, and also an intense exam on urban architectural history).  I’m guessing that most of you reading this blog post might say the same, and it makes sense based on what we know about how people learn:  the more active students are in researching a topic or creating a final project, the more they retain!

Just about every semester since I switched over to only take-home midterm essays and final exams, I have had at least one if not several students THANK me for permitting them to write their exams on their own time and in an environment conducive to their intellectual productivity.  And it’s not just students with learning disabilities–it’s other students who appreciate the opportunity to give me a fair rendering of what they’ve learned, rather than an exam dependent on how many other finals they’ve already crammed for, how many they have left to go, and when their rides home or plane tickets say they’re leaving town.

Next year, when I’m scheduled to teach another survey course, I’ll face a practical and moral hurdle because I decided to stop using plagiarism detecting software in my upper-division courses.  It’s not very good–every one of the (few) cases of plagiarism I’ve found in my classes in the past decade I’ve found on my own.  But also, I’m sick of my students giving their intellectual property away for free to a company (Canvas! Blackboard! Whatever!) who sells it back to my university and other universities in their (craptastic) plagiarism detection software.

20 thoughts on “WIZ 301: Defense Against the Dark Arts, or, how universal design improves our teaching”