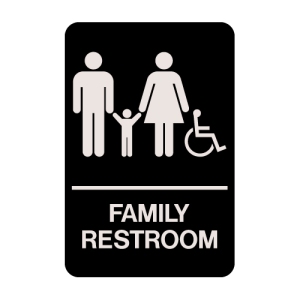 Sweet baby Jesus, please let public restrooms all become inclusive/family restrooms already. They’ve been a problem for many of us (if not most of us, at least once in a while) for years, including folks in the non-transgender majority.  John D. Sutter argues that sexed bathrooms are relics that should be abolished as racially-exclusive public restrooms were fifty years ago.  I agree entirely, especially because there’s such a simple solution right before us!

When I was a first-time mother back in the early 2000s, the “family restroom” was fairly new on the scene, and I thought they were lifesavers.  (Maybe they were there all along, and I just didn’t have occasion to seek them out beforehand?)  Changing a baby in most public restrooms isn’t too difficult–I thought the family restrooms were even more useful when the children become toilet-trainee toddlers and little kids, because that’s when the extra space and time for everyone to go came in very handy.

I’m sure that most of you, like me, have had occasion to enter an opposite-sex restroom. For opposite-sex caregivers of the very young and the very old, it happens all of the time.  What about fathers of young daughter, who might be just fine using the women’s room, but at what age?  Age 5?  Age 4?  What if they’re alone and don’t have a sibling to accompany them?  Mothers of young boys–at what age do you stop insisting that they follow you into the women’s room?  And looking after babies and young children is the easy stuff–what about caregivers of very elderly and/or disabled people, who might need toileting assistance?  Should their ability to travel or appear in public depend on their having a same-sex caregiver who can take them into public restrooms assigned either to men or to women?

But long before North Carolina passed its noxious bathroom bill, public restrooms were spaces in which some people have felt free to shame one another.  As a short-haired woman (and a femmy one at that), I’ve been scolded for using the women’s room!    This also has happened to most of the butch lesbians I know, too.  Even as an XX woman who’s recognized 99.9% of the time as a woman, it’s embarrassing when someone presumes to gender-shame you.  Once, when I was in a gas station waiting in the long line for the women’s room, I hopped into the (empty!) men’s room to relieve myself (trust me, it was a travel emergency), and was then lectured by the clerk as I walked out, “next time, you can use the ladies’ room!”  (Yeah, like there’s gonna be a next time!  Piss off, South Bend, Indiana!)

So count me among the millions of Americans who would be thrilled to see our sexed bathrooms go the way of “smoking areas” on airplanes and restaurants, and racially segregated drinking fountains.  As Sutter argues, “No one’s harmed as long as we men stop peeing on the toilet seat.”  (Truth be told, women are just as guilty!  Maybe even worse, because some extremely stupid women think that sitting down on a toilet seat will somehow be more sanitary for them than trying to hover over and peeing all over the seat.  Tacky!)

So please, everyone:  if you sprinkle when you tinkle, please be neat and wipe the seat!

6 thoughts on “Restroom panic! The solution is so obvious.”