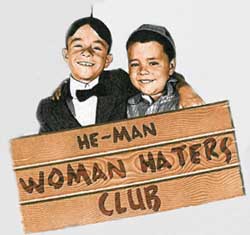 Busybusy again today–no time to think up and write a post myself, but Tenured Radical (who is herself busybusy) is hosting a conversation about sexism in hiring and tenure decisions at Princeton and in academia in general.  She writes:

Untenured faculty are always wanting to know what that little extra edge is that will get them tenure.  Be a man and ignore your students, that’s my advice.  According to the Daily Princetonian, President Shirley Tilghman suggested back in 2003 that if baby Tigers did not focus so much on teaching they would have a better chance of getting tenure.  According to attorney R. William Potter (no relation to the Radical),

In December 2003, Tilghman advised junior faculty not to focus so much on teaching undergraduates; if they want to obtain the holy grail of tenure they should concentrate on scholarly research, she told them, as their “first and foremost” priority. “Their ability to conduct research and demonstrate excellence in scholarship is the most important thing we look at,” she said, although she added that teaching ability is also “considered very seriously.”

I can’t find the origins of the Tilghman quote about tenure cited in the article, but if you go hereyou get to an article that cites Tilghman’s position in 1996 that tenure is a sexist institution and ought to be abolished. Now that’s what I call interesting.  But like all successful people, she now says that isn’t really what she meant.  She was just trying to be provocative, she explained in 2001, recanting this position after she took office as President.

Many readers pointed out that not advising junior faculty at Princeton to focus on their research would be malpractice–but in a further comment TR explained that she is dismayedthat “after all these years, and even at a place like Princeton (whose history department has numerous scholars quite famous for their teacher[ing]) we have nothing more creative to say to untenured people about the relationship between developing these two skills than ‘Do less of this/do more of that.’ That’s true at Zenith as well, where it is even odder really, since the kind of people who teach at Princeton often send their kids to places like Zenith because they know they will be taught in a way to a standard they have less chance of finding at a prestigious Ivy. I suppose the creativity I seek is more along the lines of ‘HOW do we help untenured faculty learn to teach well, given the circumstances of their teaching lives, and in a way that supports scholarly production?'”

I already seconded this question over at TR’s place, and added my concern that one reason institutionalized sexism still haunts us all is the gendering of teaching as female and research as male.  This may be what’s inhibiting our conversations along the lines TR suggests, either because 1) we may discover that we don’t in fact hold men and women faculty to the same standard when it comes to their teaching, or 2) we may find that we’re all resistant to conversations about how research supports and enhances teaching because that might diminish its prestige.

Why as TR writes “after all these years” don’t we talk more about how scholarship and teaching enhance each other and can be used productively to build effective applications for tenure?  Do we perceive research as the most prestigious of our activities because it’s effectively gendered male, and are we all–women and men alike–reluctant to compromise its value by introducing girly values like good teaching into our conversations about research?

What do you all think?  How does teaching factor into tenure decisions at your colleges or unis?  I just said the other day to a friend whose department is running a search and who expressed concerns about one candidate’s teaching abilities, “Hire the person with the best and most interesting research agenda.  You’re never in your whole career going to cast a vote against someone because hir teaching isn’t good enough.  It’s just never going to happen.”  (So am I part of the problem?)

0 thoughts on “Is research a tool for maintaining the sexist status quo in academic departments?”