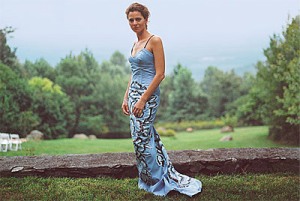 The author on her (lesbian) wedding day

Ariel Levy is now a staff writer for The New Yorker.  (When did this happen?  Why wasn’t I told first?)  Let’s face it:  The Atlantic, The New Yorker, The New York Review of Books–they’re still Sausage Parties, but they seem to be even moreso with a vengeance in the past decade or so.  So, it’s big news that the New Yorker has hired a feminist writer to write professionally about feminism and gender issues.  Hooray!

A few weeks back, Levy had a great article about women’s history and LGBTQ history that is a must-read for women’s history month.  She writes about a band of lesbian separatists who imagined a different kind of life and family for themselves, and lived their dreams (out of a van, so they called themselves the Van Dykes) for a few years in the 1970s on the road in North America.  It’s a familiar story to anyone with any familiarity with American utopian movements–from the Shakers, to the Oneida community, to Battle Creek, and so on:  idealism and a real hope for a different world succeeds for a while, but then fails because they lose the zeal of the founding generation and/or they’re driven apart by sexual jealously.  The charismatic leader of the Van Dykes, Lamar Van Dyke, admits that modern lesbianism seems mystifyingly conformist, while Van Dyke’s determination to live her life on her own terms elicits Levy’s admiration:

Regardless of the different people of different genders she has chosen over the years as her comrades, Van Dyke’s primary loyalty has always been to her own adventure.  A woman in her sixties who has been resolutely doing as she pleases for as long as she can remember is not easy to come by, in movies or in books, or in life.

“Your generation wants to fit in,” she told me, for the second time.  “Gays in the military and gay marriage?  This is what you guys have come up with?”  There was no contempt in her voice; it was something else–an almost incredulous maternal disappointment.  “We didn’t sit around looking at our phone or looking at our computer or looking at the television–we didn’t sit around lookng at screens,” she said.  “We didn’t wait for a screen to give us a signal to do something.  We were off doing whatever we wanted.”

Although still just in her 30s, Levy has already written about her disappointment with younger feminists!  Her 2006 book Female Chauvinist Pigs:  Women and the Rise of Raunch Culture was an original, smart, and entertaining read about the disturbing extent to which young women today have absorbed the message of the broader culture which sexualizes them at an early age and encourages them to turn themselves into plastic-surgeried, waxed, and spray-tanned objects for male consumption.  Many young women believe this is “liberating,” rather than oppressive, and Levy is quite critical of (for example), breast implants at sixteen, and straight women who make out with each other for a cheering audience of drunken young men.  I saw her speak at Moo Moo U. last year–she was very lively, bright, and appeared to make a real connection with the audience.  I heard from my women’s studies-connected friends who took her out to dinner afterward that she was fun and quite gracious.

17 thoughts on “The Van Dykes, and the generation gap among lesbians”