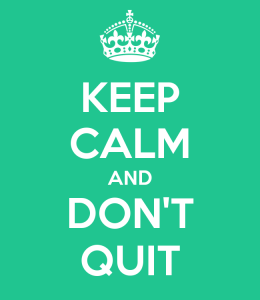 Let me tell you why not to quit.

You’ve been told that the university is a back-breaking neoliberal machine. That it encourages a certain solipsism and inhibits any sort of solidarity. That it will wall you off from colleagues and comrades. That it wants you to be happy but also to focus only on your own happiness. And that, by doing so, by finding happiness in the profit you glean from your own labor, you are complicit in someone else’s tragic undoing. In their erasure from life on the tenure stream. And in their own chance at happiness. That the ideological work of the institution dissolves your identity as a worker, and that it makes it impossible for you to connect with someone else with a different pay grade or institutional status, even if you both work in the classroom.

The architects of this story are scarred survivors of a dystopian landscape. Brilliant and talented, they’ve walked away from the tenure stream, spent a few years questing for a bright future, or never quite got close. The university they describe is bleak. It features: people tearing down other people; days and weeks spent alone in the office; a job market that resembles Lord of the Flies; faculty who are either preening peacocks or back-stabbing social climbers; students who will suck the life out of you, or who too closely scrutinize your tone and your words; administrators interested only measuring things, in taking away money, or in expanding their own ranks. They describe a life set to the lonely rhythm of the keypad and warmed by narcissism.

He appreciates the totalizing effects of this academic dystopianism:  “Full of strong colors and clear divisions, it is a magnificent, totalizing, overdetermined work of art.  Dystopian landscapes serve a purpose. They do great political work. Their broad brush strokes are meant to persuade, but also to focus the eye on a single, instrumentally conceived big picture. I might disagree with them on the details, but I also see their truth out there.”

But then he makes his point, which is an important one:  “other realities are out there. Other landscapes for you to inhabit. Or to create.”

Stick around. Fix the place. For others.

You have to build this idyll. Like installing hardscape in a garden, along with the flowers and plants that accompany it. That stuff is heavy. Or delicate. None of it appears naturally. It isn’t regular feature of higher education, but it can be a big part of it, if you want. You just have to set each block, one at a time, and move mountains of earth, here and there. And then you have to cultivate it. It requires your attention. Every. single. day.

But Guterl teaches at BROWN UNIVERSITY, a bastion of privilege, you might say.  He teaches students who are college-ready, and only a few classes a year, and has a research budget and talented graduate students who do most of his grading for him!  Well, so what?  Do you think that Brown University appeared as a mirage in a desert staffed by magical unicorns and fairies who make everything beautiful for the lucky few without a lot of work on the part of faculty, administrators, and students?  Of course not.

Guterl hits on something that has bothered me about academic dystopian quit lit, which is the presumption that it’s someone else’s job to fix our work environments as though they exist outside of us, the workers.  There are times when you just have to walk away in self-preservation–I’ve done it!  But there are also times when it might be appropriate to “be the change” and improve your work environment yourself.  As Guterl points out, there are some faculty who are working to create positive and productive workplaces for colleagues, staff, and students alike.

After Winston Churchill’s famous comment about democracy, “academia is the worst possible work environment, except for all of the others.”  Academics would know this if they talked to a few police officers, physicians, pipe fitters, retail workers, and waiters.  Yes, for-profit universities were founded to rip people off and suck government money out of the system.  Yes, too many public universities appear to be organized primarily to provide free farm clubs for the NFL and the NBA (mine included).  Yes, elite private universities are too generous with legacy admissions and too addicted to monster alumni donations to do much but perpetuate the inequalities of the status quo.

No one feels particularly in control of the conditions of their labor, but some of us faculty in academia still have some kind of say over our work conditions.  And some of us work with first-generation college students who come to us in order to educate themselves as well as to improve their chance of economic success in life.

Here’s what I tell myself when I get frustrated:  I work in what used to be called a “helping profession.”  That is, my job isn’t ripping people off or selling them garbage they don’t need.  My job is offering education and critical thinking skills to students who volunteer, and mentoring and advancement to junior colleagues both at my university and around the world.  That’s it.  And I’m striving to use my tenure to try to make other people’s work and study conditions better.

I feel pretty good about that, but I sure appreciate Guterl’s reminder that it takes work, work, and more work.

19 thoughts on “Tired of academic quit lit? Another view on academic labor.”