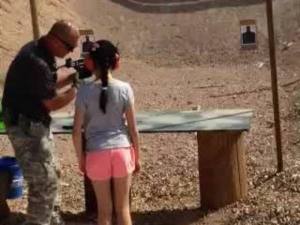 As I’m sure all of you know already, a nine-year old killed the man who was instructing her in the use of an Uzi submachine gun this week at a shooting gallery in Arizona.  The  juxtaposition of this story with a story from earlier this summer, in which a mother spent more than two weeks in jail for letting her 9-year old girl play in a park by herself while she did her shift at McDonald’s, says it all:  “In America Today, a 9-Year Old Girl Can’t Play Alone in a Park But She Can Play With an Uzi.”

Andy Borowitz satirized the current conversation about parenting and guns yesterday in “Nation Debates Extremely Complex Issue of Children Firing Military Weapons,” but then I open the L.A. Times this morning to find exactly this kind of “experts say. . . “/”others argue that. . . ” debate as to the best way to teach children to use guns in the pages of one of America’s great newspapers.  As though the use of semiautomatic weapons by children is a debatable issue!  Where were the voices of public heath experts, family practice doctors, and pediatricians?  Where were the voices of parents in Chicago, whose neighborhoods are routinely interrupted by gun violence and who fear for the safety of their children just walking to and from school?

Let’s not overlook the enormous role that race and gender play in both of these stories.  First, let’s talk about race:  the McDonald’s employee, Debra Harrell, and her daughter are African American.  The Arizona child whose parents permitted her to fire an Uzi appears to be white.  Why do we know Debra Harrell’s name, but not the name of the (presumably white) parents from New Jersey whose daughter killed her shooting instructor?  Shockingly, there are no laws that would permit their arrest and thus their entry into the public record.  Why isn’t their judgment being publicly debated?  Why doesn’t New Jersey (their home state) social services take this 9-year old out of their custody because their poor judgment endangered her life and has led their daughter to do something that will haunt her the rest of her life?

Secondly, gender:  I can’t help but notice the way that teevee and radio news people emphasize the fact that the shooter in Arizona was not just a 9-year old, but a 9-year old girl, as though her offense is particularly perverse (and as though a 9-year old boy’s involvement with an Uzi wouldn’t be just as shocking.)  This interest in her sex indicates that even now, we assume that gun ownership and use are typically male activities.  Gender is also at play here when we think about the ways these public conversations about parental culpability have played out:  Harrell’s judgment as an African American woman and mother was criminalized as matter of course, but the judgment of the presumably white parents, and in particular the judgment of the Arizona 9-year old’s father, the person who according to our cultural assumptions would be in charge of gun ownership and education, is perforce above particular scrutiny.

I really should be taking notes on the book I’ll need to write 30-40 years from now about the dangerous radicalism of the NRA and gun manufacturers, the poison they injected into the American body politic, the ideological fanaticism of many American gun owners, and the distortions of common sense in our civic life that resulted.  This madness will pass, eventually, and your grandchildren and great-grandchildren will marvel at the shocking irresponsibility of adults in the early twenty-first century.

I either need to start taking notes for this book, or explore Canadian citizenship.  My husband used to be Canadian, so I think there’s a way that all of us in our family can get over the border with new passports.