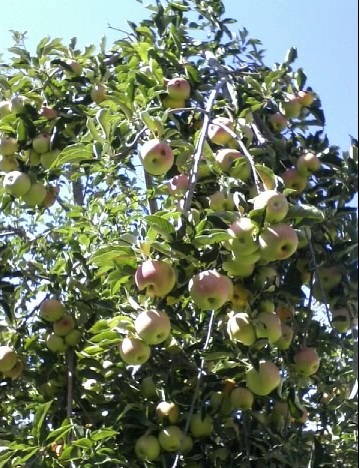 This is September in Colorado:  cool nights and warm afternoons with clear, blue skies.  We’re lucky to have an heirloom apple tree in our yard, which this year is absolutely loaded with fruit.  (The hot, dry summer has been perversely great for the Colorado fruit crop.  This tree ain’t exactly an orchard, but it appears to share in the local bounty.)  With any luck, we’ll have enough pies and applesauce to last us until the apple blossoms open next spring.

Maybe it’s due to my huge fangirl crush in the 1970s on Laura Ingalls Wilder and her Little House series, but I’ve always been inordinately charmed by “free food,” and aggressively motivated to do something with it when I find it.  When I was a little girl, I loved finding those ferny weeds in people’s lawns that looked like Queen Anne’s Lace, but whose roots resembled (and tasted like) thin, pale carrots.  (Maybe they were Queen Anne’s Lace?  I don’t know.)  I remember a scrawny clover whose lemony leaves we used to chew.  My greatest childhood discovery was perhaps a patch of strawberries along a lazy spring that burbled up in the woods by my house.

All of these finds spurred survivalist fantasies that were originally inspired by Wilder’s pioneer imaginary:  I didn’t have a gun and I’ve never seen a prairie chicken in my lifetime, but I might find something that could help pa and ma round out supper tonight.

As an adult, my fascination with found food never dimmed.  I remember in particular a hike I did with friends the year after we graduated from college in the mountains outside Winchester,  Virginia.  I forget what the hike was actually called–after finding loaded raspberry and blueberry bushes there, we dubbed it “Mount Snackmore.”  And Fratguy has caught a clutch of small trout on more than one camping trip that was enough to provide a welcome supplement our camp dinners.  And this summer, in Boulder, Utah, I found a tree loaded with ripe apricots that seemed utterly neglected by the side of the road, ripe fruit rotting on the ground, so I picked some to eat before continuing on my run.

So come the first week of October, I’ll be standing at the kitchen sink washing, coring, and trimming apples for pies, with a pot of applesauce simmering on the stove behind me.  These apples are excellent for pies and baking–nicely tart, but not too tart to eat out of hand.  They sweeten up a bit and improve if we wait until the first hard frost to pick them.

If you have any good apple recipes or ideas for apple preservation, or just a good apple story, let me know.