Maybe it wasn’t all of a sudden–maybe it’s a process that has happened over the last few years, or maybe I was born this way, but I find myself wanting to align myself with the queer bloggers ever more closely.  The queer bloggers I read and feel a comradeship with don’t think that there is only one way to be a good lesbian or gay man.  They don’t police the language that other gays and lesbians use to write about or talk about their own experiences.  We sometimes disagree, but they don’t feel the need to lecture me about daring to write about queerness or question the authenticity of my queer sensibilities.

Some of you heterosexualists, especially some of you who identify online as mothers:  not so much!  Quite frankly, I’m tired of my comments threads being jacked by people claiming to be mothers who are offended by this or that thing that I wrote about motherhood.  Although Historiann is not a blog about motherhood, I will talk about motherhood whenever I like because I am an American women’s historian, and motherhood is something about which women’s historians in general have had a lot to say.  Feel free to disagree with anything I write–but don’t bother with the complaints about “hurt feelings” and the insistance that your subjectivity is the only one that counts.

Dr. Crazy has written about the ways in which the interests and views of one subset of women–mothers–come to dominate conversations in the feminist blogosphere.  For example, conversations about improving workplaces for women come to be about maternity leave and child care, as though the careers of non-mothers are somehow perfectly free of institutionalized bias against all women.  She writes:

But don’t tell me what I should think or what words I’m allowed to use. Don’t expect me to believe that the needs of parents are somehow more important than the needs of other workers. Because I just don’t believe that. 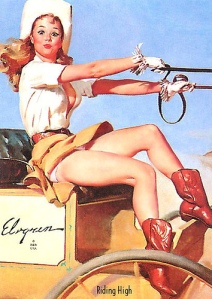 Some conversations here this summer have followed a familiar trajectory–like yesterday’s post in which I made an aside about how I didn’t think motherhood should qualify one for an exemption from jury duty.  The comments degenerated into accusations that I’m smug and not authentically feminist because I wasn’t sympathetic to the difficulties of finding child care, the frustrations of women who care for their own children, etc., when I thought it was clear that I criticized *one* woman in particular for mobilizing motherhood as a strategy for avoiding the responsibilities of citizenship.  (As I said in the comments there–I’m sure Elizabeth Cady Stanton, the mother of seven, is spinning in her grave!)

So if this is what some readers think it means to be an authentic straight mother/feminist  blogger, I want off this wagon train.  And if anyone asks, tell them that I just went gay all of a sudden! Now, which of you gay bloggers is going to fix me a drink? (I’ll bring the steaks, obvs.!)