I once had a roommate in college who referred to me as a “flatlander” because I was a native of Ohio, one state west of us in Pennsylvania.  Most of Ohio is, however, luxuriously green, lush, and hilly, sited as it is on the Ohio River and neighbor to the Appalachian Mountains.  I started to wonder more about this descriptor “flat” as I drove from Ohio to Colorado on I-70 nearly a dozen years ago.  I had dreaded the drive across Kansas especially because everyone in Ohio had sympathized with me about enduring “flat” Kansas.  “It’s so flat,” they all said. But I-70 across Kansas in August, I found, was mostly lovely rolling green hills dotted with round hay bales and sunflower fields worthy of a Vincent VanGogh painting.

So, what, I wonder, is the function of calling a state or a region “flat?”  Flat is almost prima facie an insult.  What is described lovingly or admiringly as flat?  Nothing that I can think of.  Flatness connotes homogeneity, dullness, and an absence of fertility.  Beverages and foods described as “flat” are the opposite of tasty.  Women’s figures are insulted as “flat” if they don’t have prominent or cute breasts.  Accents are described as “flat” if they’re owned by people from states and regions described as “flat.”  The Oxford English Dictionary is a font of the insulting connotations of flatness–interestingly, the military or political resonance of being flattened, laid flat, or prostrate by a foe was quite prominent in the first several definitions of the adjectival form.  Perhaps calling a state or a region “flat” is a rhetorical move meant to lay claim to (and insult) the land and people of another region, if only linguistically. 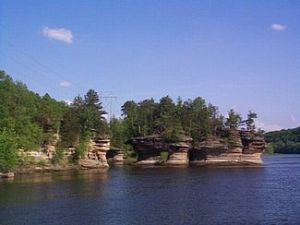 Parts of most states in the U.S. can fairly be called flat.  For example, my native corner of northwest Ohio and southeast Michigan are in fact pretty flat.  Northern Indiana and Illinios are pretty flat too, but south of I-70 they’re as hilly as the rest of the Ohio valley.  Some of southern Minnesota and Wisconsin is flat.  Colorado, on the other hand, is a state that is considered the opposite of “flat” because the Rocky Mountains march regally down the middle, but eastern Colorado–and especially northeastern Colorado–is pretty darn flat.  Much of Wyoming on I-80 is scary flat, but because it’s framed on most sides by mountain ranges and marquee National Parks like Yellowstone and Grand Teton, no one calls it “flat.”  At the same time, there are few places flatter than Manhattan, Philadelphia, Washington, or Baltimore.  Eastern Massachusetts is pretty damn flat too, but no one calls it that.

Although I question the extent of the flatness of so-called “flatlander” states, I think there’s actually an aesthetic of flat.  As opposed to the very hilly, cliff- or butte-strewn, or even Badlands character of the drive I’ve just completed, there are many flat landscapes that are utterly beautiful.  I remember a westward drive in June across Wyoming on I-80 during which we watched thunderstorm after thunderstorm roll over us, the blue-black skies and golden sunshine making a gorgeous contrast with the green of the pinion pines and the tumbleweed and the red of the soil.  One of my favorite drives is U.S. 127 through western Ohio and southern Michigan, with its orderly procession of fields and farmhouses, county seats and courthouses, for more than 200 miles.  Ironically, Denver is a damn flat town (it is sited on the Platte, or Flat River, of course!) but we don’t dismiss Paris on the Platte as “flat.”

Why do we call the U.S. midwest and prairie states “flat?”  Most of the people who dismiss these places and regions are very unfamilar with them.  Why do we feel the need to condescend out of ignorance?