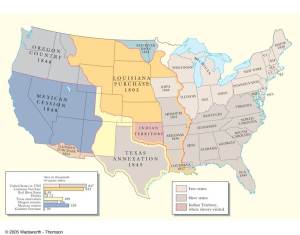 Nota Bene:  This is a post of interest mostly to American historians, although I would certainly welcome the thoughts of other historians about the role of place or geography in their sub-fields.

Here’s my question:  is there any such thing as regionalism in American history any longer?  Northeastern history was always a regional history, but historians (many of whom lived in and/or trained in the northeast) for the most part denied that it was a regional history and instead claimed to be writing “American history.”  There are regional and state-based history associations like the New England Historical Association, but there is no Northeastern Historical Association.

Western history used to be much more about place, but I think the consensus has shifted to seeing the West–and more broadly speaking, what used to be called “frontier history” and is now called most often borderlands history–as more of a process than a region.  That is, diplomacy, trade, and violent conflicts between Native Americans, Euro-Americans, and various other ethnic groups, depending on spatial and temporal location (Chinese immigrants, Latinos, and African Americans, for example), are a central part of American history from the Columbian “discovery” to our contemporary debates about immigration and border security.  There  are Western historians who would defend more of a place-based definition of their field, but my sense as a Westerner (but not a Western historian) is that that view is on the decline.  There is in fact a Western Historical Association, but having attended a few of their meetings when they’ve passed through Denver, I surely have felt plenty comfortable participating in conversations there.  What’s going on at the WHA seems to  be what’s going on in the profession more broadly.

The only subfield that seems to be holding out for the distinctiveness of a particular region any longer is Southern history (surprise, surprise.)  The Southern Historical Association (or, “the Southern” for short) and its members are probably more committed to a regional view of history than any other historians, but there are cracks in the foundation even there.  A friend of mine who recently reviewd a book on Southern history has told me that it actually made a strong case for the subject of the book as something not distinctly Southern.  This seems to be a new trend, although I’ve read a few recently published books that argue for regional distinctiveness, too.

The way things have changed in my field of early American history is instructive, I believe, about the way things are going (or have already gone.)  My training in the northeast 20-25 years ago was very regionally-based, although those were the sub-regions of colonial British America:  New England, the Middle Colonies, the Chesapeake, the Lower South, and the Caribbean.  That was diversity in the 1980s and 1990s, with one week tossed in for “women,” one for “African Americans,” and one for “Native Americans.”  (Forward-thinkers would also include a week on “the backcountry,” which meant mostly Kentucky and the Ohio River Valley.)  Now when I teach at both the undergraduate and graduate level, I wouldn’t dream of using this class organization, and I tend to focus on more conceptual or methodological issues, like environmental history, the history of slavery, women’s and gender history, the history of the body, the history of sexuality, history and memory, religious encounters, and the like.

What do the rest of you historians think?  Is region dead, replaced by more conceptual or process-based analyses and/or studies that aren’t regional but are rather intensely local?  Why has this happened, if indeed it has happened?  Is it happening outside of U.S. history in any other national or continental histories?  Is this a good or a bad development, in your view?

24 thoughts on “Are there any regions left in American history?”