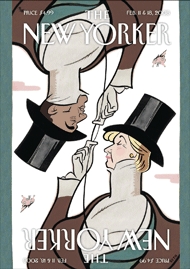 It’s a good day to be a boy genius:  Barack Obama once again swept two big primaries and overwhelmed Hillary Clinton yesterday in a Southern state primary.  Now all eyes turn to the Eastward, to see which way the Maine caucus will go.  UPDATE:  As the nation goes, so goes Maine, at least this weekend?  Obama wins another caucus in a walk–so far, with 59 precincts reporting, it looks like 57-42 for Obama.

In other boy genius news:  NPR’s Weekend Edition Sunday featured an interesting bit of trivia:  this winter is the 150th anniversary of the popularization of Felix Mendelssohn’s “Wedding March” as a wedding recessional.  The credit (or blame) goes to the planners of the wedding of Queen Victoria’s eldest daughter Princess Victoria Adelaide Mary Louise to Frederick Wilhelm IV of Prussia, on January .  More interesting to me was the fact that Mendelssohn (1809-1847) composed the “Wedding March” as part his composition of music to accompany his favorite play, William Shakespeare’s A Midsummer Night’s Dream, at the age of 17.

But as classical music historian Robert Greenberg says in the interview, Mendelssohn was already an accomplished

and ambitious composer who between the ages of 12 and 14 had composed four operas, twelve string symphonies, among others.  “He came from a wealthy banking family in Berlin, and his parents wanted only the best for their children,” Greenberg says in the interview.  “They were over-educated by any standards. Mendelssohn could speak multiple languages as a child, reading Homer in the original by the time he was 10. He was also an excellent water-colorist. Music was just another one of those things he mastered as a young man.”  It’s a good thing he accomplished so much at such young ages–he died at age 38 from a stroke.  Tragically, a stroke had killed his sister Fanny the previous year.  Brother and sister were very close–upon hearing of Fanny’s fatal stroke, Mendelssohn allegedly screamed and fainted away.  A rather Gothic flourish for a man known as the first of the great Romantic composers.

0 thoughts on “A good day for prodigies”