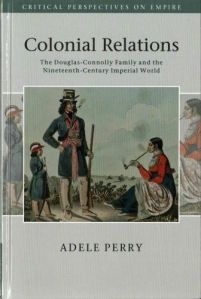 Hello friends–today’s post is just a little bagatelle from my review of Adele Perry’s excellent Colonial Relations:  The Douglas-Connolly Family and the Nineteenth-Century Imperial World (Cambridge University Press, 2015) at Borealia:  A Group Blog on Early Canadian History.  This is a “translocal” history of the extended family of Sir James Douglas (1803-77) and Amelia Connolly Douglas (1812-90) that spans five generations in the Caribbean, Britain, and all of the North American fur trade.  To wit:

As accountant at Fort Vancouver in the 1830s and as the chief factor there in the 1840s, [James] and Amelia lived frugally and suffered more than their share of domestic tragedy with the deaths of seven of their thirteen children. Notably, most of the short-lived children were born very early in their long marriage, from 1829 to 1838, when five out of their first six children perished before age 3. Whether this reflects the nutritional and epidemiological conditions at Fort Vancouver shortly after its founding in 1824, or whether this reflects the fact that Amelia was too young and frail as a teenager and young adult to sustain healthy pregnancies and infants, it’s interesting to note in our age of panic over “advanced maternal age” that most of her surviving children were born when she was between the ages of 27 and 42. The experience of losing so many infants and toddlers early in their marriage made its mark on James, who “still recalled theirs as a ‘family of 13,’” rather than a family of six children (168).

But the fur trade world built on nearly three centuries of intermarriage and the creation of an influential Metis bourgeoisie was coming to a close by the time of the Douglas-Connolly marriage in 1828. James’s rise through HBC ranks was doubtlessly accelerated by his alliance with a powerful and wealthy Metis family (the Connollys), but in a world that was rapidly filling with white Canadian and American women, the position of women like Miyo Nipay and her daughter Amelia was increasingly precarious. Fur trade marriages were usually built on several interlocking hierarchies that privileged husbands over wives—such as the absolute practice of whiter and lighter men marrying darker-skinned women, the fact that the women were frequently young teenagers and the men well into their 20s or 30s (or beyond), plus the access that many men still had to metropolitan marriage in Eastern cities or in Britain and the means to retire into white family life—it nevertheless offered advantages to Metis and First Nations women that patriarchal Christian marriage did not.

So Perry argues convincingly that it was significant early on in their “country marriage” in 1837, after a Protestant missionary arrived at Fort Vancouver, that James and Amelia consented to have their union formally blessed by Anglican rite. The arrival of protestant American missionaries represented the rise of not only settler colonial ideas about supposed racial purity and superiority, but also the rise of patriarchal values over the authority that women in Indigenous and Metis Catholic families exercised in their families and therefore over the business of the HBC. After the British relinquished the Columbia River valley and all of its lands south of the 49thparallel, in 1849 James left Fort Vancouver and moved HBC headquarters up to Fort Victoria on Vancouver Island, where in 1851 he was named both the governor and the chief factor for the HBC. In 1858 he became the governor of all of British Columbia.

Click on over to read the whole thing!  And those of you who are not Canadians or historians of Canada:  consider reading this book, or another book that deals with Canadian history.  For those of you who are British or American historians, you may find that as I note in my review in a slightly different context, Canadian histories feel “like those photo albums in antique stores that are labeled for sale as ‘instant ancestors’—they’re not necessarily blood relations, but they look a little familiar.”

Fun fact!  As you may have guessed from my Colorado-based cowgirl-themed blog, I love the efforts of people in cyberspace to bring a sense of place to their online personae and writing.  True to its name, Borealia –meaning (loosely) northern stuff–published this review at 7 a.m. Atlantic time, three hours ahead of where I am in the North American Mountain time zone.  Wherever you are waking up this morning, look to the northeast edge of the Americas and check out Borealia.

3 thoughts on “My review of Adele Perry’s Colonial Relations (2015) is live at Borealia!”