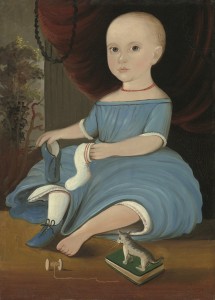 Max Nelson offers a fascinating overview of a current exhibition at the American Folk Art Museum in New York, “Securing the Shadow:  Posthumous Portraiture in America.”  I find this subject both touching and horrifying, especially considering the understandable impulse to commemorate lost children.  But as Nelson notes (per the exhibition), the practice of painting or sculpting the recently deceased continued long after the invention of photography and the democratization of family portraiture.  In fact, “mortuary photography”–photographs of the recently deceased, especially babies and children–was a big chunk of the business in early photography.

There’s a painting I’ve been using in my classes to illustrate the changes in how free Americans envisioned marriage and family life from the eighteenth to the nineteenth centuries.  The Ephraim Hubbard Foster Family presents such a lively contrast to the dour mid-eighteenth century puritan portraits of husbands and wives–the fresh, blushing complexions! The number of children, who appear to have been painted as individuals!  The focus on parental youth and beauty!  I’ve wondered for a long time if the child so extraordinarily costumed on the window sill is in fact a dead child, but having reviewed the online images this exhibition offers, I don’t think this is the case.  Here’s the portrait: 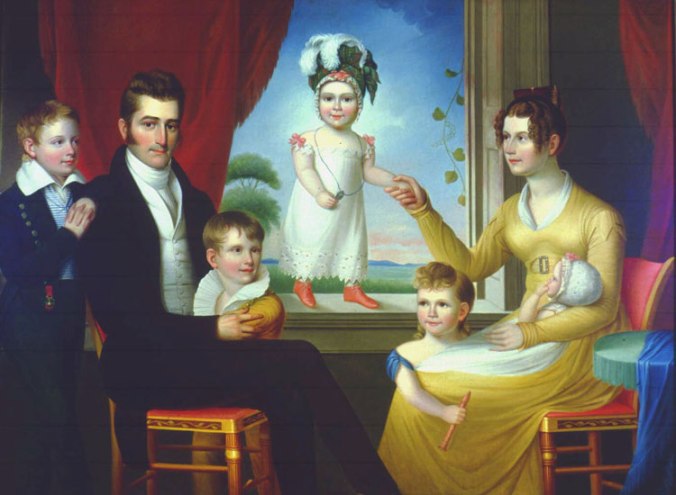 The child at center appears so much more lifelike than the dead babies and children in the American Folk Art Museum’s show.  Just noodling around in Google books, I’ve found some family genealogies but can’t confirm the death of a child around 1824.  Moreover, the little I’ve read about the artist, Ralph E. W. Earl, suggests that he wasn’t likely to have been a painter of the dead.  According to Nelson’s article, these painters were likely to be untrained, while Earl was a European-trained artist who studied with John Trumbull and Benjamin West, as well as the son of another early American portraitist, Ralph Earl.

I’d like to do more research on this portrait, as there doesn’t seem to be a lot of scholarship on it or on the family outside of Tennessee and Alabama genealogical circles–this in spite of the fact that Ephraim Hubbard Foster served twice in both the House of Representatives in Tennessee  and as a U.S. Senator.  The artist who painted the Foster family portrait also painted several iconic portraits of Tennessee’s most famous politician of the early U.S. Republic, Andrew Jackson.

The Fosters look a hell of a lot more lifelike than Andy J. does!  He looks pretty waxen in the portrait above, although I’m sure it was a flattering portrait of the man, who upon leaving the presidency had nary a tooth in his frequently-abscessed head, and suffered from a variety of other disfiguring ailments resulting from heart disease and tuberculosis.  At left is an image taken in 1845, the year of his death at age 78.  He didn’t look a day older than 135!

I wish I could get to the American Folk Art Museum to see this show before it closes in February, but I won’t.  The AFAM is a little jewel that I’m afraid gets overlooked amidst the hoarde of art and cultural treasures stashed in NYC.  I remember going there nearly 30 years ago in college and being really impressed–with their collections, the intelligence and historical scholarship that went into their curation, and *poor student tip*—admission is free of charge!  Beat that.

And if any of you have ideas for me about the Foster family portrait, please let me know.  For years I’ve regretted not studying more art history in college.  I may just have to figure it out and become one myself.