Happy South Pole summer!  We have seen recently that climate change is already a reality in many regions in the world.  Summers are hotter, winters are harsher, and weather events everywhere are more extreme.  It’s easy to fall into a funk, but take heart!  Popular entertainment shows us the way to deal with the economic effects of climate change, if not the environmental and public health and safety consequences.  (Priorities, people!  This is America!)

There IS something we can do, if we only look to Hollywood Christmas movies and TV shows from the twentieth century.  Let’s run through some instructive examples, OK? 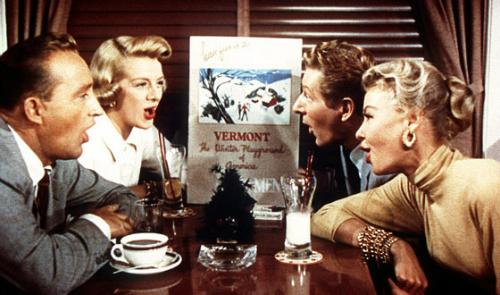 Problem:  insufficient snow at a winter resort.   This is a major fear in places like Colorado, which depends on winter sports, especially skiing, to propel winter tourism.  What do you do?  Well, you remember how much you loved the Old Man who owns the resort back when he was your C.O.  Solution:  Convince an army buddy to go up to Vermont, grab a sister act, and put on a show, inviting all your less talented army buddies to book tickets to your dinner theater.  Magically, the snow will begin to fall by the end of the show, saving the Old Man’s retirement and the local ski industry.

Problem:  Unseasonably warm weather threatens end-of-year retail earnings; also, Santa Claus depressed.  This is what happened in the east in 2015, with temperatures in the 60s F in December w/r/t the weather; not sure about Santa’s mental health last year.  But warm weather in December is a problem.  People don’t think winter is coming or Christmas is near, so they don’t buy new coats, sweaters, or Christmas gifts, which threatens profits in Q4.  Solution:  Mother Nature to call a meeting with her feuding sons, Snow Miser and Heat Miser.  They can work it out in a few songs while Santa gets in touch with some of his stakeholders, who reassure him of their belief in him, and also a medical workup and some antidepressants.

Problem:  Winter storms threatens end-of-tax year philanthropy.  You don’t think Santa gives away toys out of the goodness of his heart, do you?  Well, what happens if Santa can’t follow-through with the distribution all of the donated gifts and toys by midnight, January 31?   What if, for example, there were a massive, multiple-continent winter storm shutting down travel throughout the northern hemisphere?  That’s a major tax liability!   Solution:  Find a flying reindeer with a fortuitous birth defect to lead the team powering Santa’s sleigh.  Hope that in spite of a history of domestic abuse by his father and of bullying by peers, he will help out Santa anyway.  If he does, he’ll go down in history.

I’m sure I’ve missed a lot more examples–fill me in in the comments below!