Elizabeth Kolbert asks, “How can Americans trust Donald Trump?”  After all, as she notes, “As has been amply documented, Trump’s relationship to the truth is on par with his relationships with women—opportunistic and abusive. Daniel Dale, a Washington correspondent for the Toronto Star, who since mid-September has been publishing a more or less daily tally of Trump’s false claims, recently called the Republican candidate’s campaign rhetoric a veritable ‘avalanche of wrongness.'”  He lies constantly, unabashedly, and aggressively.

This, as Kolbert goes on to note, is precisely why people see him as more honest than Hillary Clinton:  he lies with gusto and conviction, which makes his lies feel true to people:

One way to understand the up-is-down logic of this election is as an expression of what might be called American sentimentalism. What moves the electorate is not true facts but true feelings.

Donald Trump is the kind of jerk who authentically, genuinely, unabashedly inhabits his own jerkiness. The indifference to reality he’s displayed on the campaign trail is the same indifference he displayed as a businessman, a husband, a boss, and a taxpayer. His narcissism, petulance, and whatever other character flaw you care to choose aren’t under wraps; they’re on view for all to see and hear. In this sense, he truly is the real thing.

By way of contrast, Kolbert argues, Clinton’s emotional control and public presentation of herself feels inauthentic because it’s so polished.  “Clinton, meanwhile, is constantly role-playing. On the campaign trail, she displays an interest in people that, one can only assume, she doesn’t always feel. In her speeches, she invokes lofty ideals, when doubtless she’s often motivated by expedience. The high-minded, Presidential persona she’s committed to is constraining in many ways.”  In other words, she behaves like we expect most adults with any modicum of authority to behave.

Kolbert is right, but as I’ve pointed out repeatedly here (see the links below!), one reason Clinton’s polished role-playing rubs people as inauthentic or untrustworthy is that she’s a woman seeking a promotion, and we all know (and as I have repeatedly pointed out on this blog–again, see below!), women who ask for promotions are seen as less likable, a quality closely related to trustworthiness.  We expect men to seek more for themselves.  Ambition is praised in men, whereas it’s seen as a character flaw in women.  Asking for more money and/or more authority is a gender-queer thing for a woman to do, and as we all know, gender queerness puts the zap on some people’s brains.  It  makes them uncomfortable and less likely to say that they “like” or “trust” someone.

In the end, I still don’t think it’s going to matter that some Americans say they don’t trust or like Hillary Clinton.  Large majorities say that she’s qualified to be president, and I have confidence that my fellow citizens are not angry or reckless enough at Hillary Clinton to elect the Human Stain president. 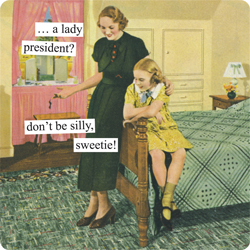 And by the way:  if Hillary Clinton is our president-elect as of next Wednesday morning, please thank every non-white voter and female voter you see.  We’re the patriotic Americans who love our country so much that we’re pulling it back from the brink of destruction.

I say this, but I know most of you won’t thank us.  You’ll bitch for the next four years about how Presicunt Killary Clinton is history’s greatest monster, seizing your guns and using them to execute all the unborn babies.  But I know that you know she’s the only thing standing between us and fascism, and you’ll never forgive her for that, will you?