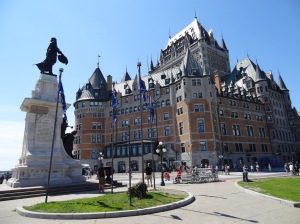 In today’s Teaser Tuesday, in which I present a snippet from my new book The Many Captivities of Esther Wheelwright and share a little information from behind the scenes, we follow Mali/Esther as she crosses the border into the city of Québec in the autumn of 1708.  She was probably in the company of one of the mission priests who had worked with Wabanaki people for nearly thirty years, Jacques Bigot.  When she arrived, she was installed at the home of the elderly Governor of New France, Philippe de Rigaud, Marquis de Vaudreuil. With his significantly younger Acadian-born wife, Louise-Élisabeth de Joybert, Marquise de Vaudreuil, he spent most of the 1690s and 1700s filling up their châteaux in Montreal and then in Québec with their eleven children, so Mali would have been in the company of a number of children close to her in age.

With her move to Québec, Mali moved into a highly status-conscious world dominated by French- and Canadian-born nobles.  Why would a New England-born Wabanaki twelve year-old be taken into the home of the governor of New France?  Read on and enjoy this excerpt from chapter 3 and a little smidge from chapter 4:

The Château Saint-Louis was in every respect a fittingly grand home for a noble French governor, much larger and finer than any of the homes of the Anglo-American governors to the south. While Anglo-American colonial governors were some of the foremost elites in their provincial jurisdictions, governors of New France were drawn only from the French nobility. Even the celebrated Samuel de Champlain is remembered only as the founder of New France; although he effectively served as its first governor, he was never given the title or commission of governor because he was not of noble birth. Acutely aware of this fact, Champlain added the “de” in between his family and given names and began (spuriously) signing legal documents as a “noble homme” and “ecuyer” (esquire) in the 1610s, shortly after he founded the colony in 1608.

Vaudreuil spent most of the years of his long governorship of New France (from 1703 to his death in 1725) completing the rebuilding of what was in fact the second governor’s château to occupy the same site, which is still perhaps the most significant piece of real estate in Québec City. There has always been one château or another on the face of Cap Diamant going back to 1648: the foundation of the Château Saint-Louis lies beneath the Dufferin Terrace along the walls of the haute ville overlooking the St. Lawrence River. Now an archaeological dig of the seventeenth- through nineteenth-century châteaux, the site is also in the shadow of the Château Frontenac, Québec’s grand old nineteenth-century hotel of the Canadian-Pacific Railroad era. Champlain has the last laugh, because this public square is dominated by a huge bronze statue of himself, not of any of the noblemen who succeeded him.

An inventory of the Château Saint-Louis completed the year after Vaudreuil’s death indicates that it had at least twenty rooms, in addition to storage chambers and antechambers, not to mention a suitable number of outbuildings to support the lifestyle of a large noble family in New France. The inventory itself took nearly three full days and recorded an extraordinary number of luxury goods in several rooms: dozens of chairs and settees, some of which were upholstered with fine fabrics or embroidered cloth; multiple tapestries, mirrors, and pictures for the walls; comfortable beds with all manner of sheets, coverlets, pillows, and curtains to fight Québec’s everlasting cold; a dazzling array of kitchen items, serving dishes, and hundreds of pieces of silver cutlery; coffee pots, porcelain cups, and special coffee spoons; hundreds of candles, several quarts of olive and nut oils, and several pounds of pepper; yards and yards of fabric, thread, and ribbons. The array of material goods and their specialized uses must have been striking to Mali, if not overwhelming.

A household of this size furnished with such extravagance was run only by the labor of a dozen or more domestic servants and perhaps some slaves, both women and men, although the enslaved people at the Château Saint-Louis were Native captives given or traded by other Native allies rather than African or African American. Although they were greater in number than the servants and slaves at the Wheelwright garrison, Mali probably recognized them and the roles they played in the Château Saint-Louis: cleaning, cooking, and waiting on the dozens of guests who were always in residence. The Château Saint-Louis was less a home run on a family scale than a political and diplomatic mission run on an institutional scale, offering hospitality to forty people or more in the fall and winter busy season—military officers, visiting diplomats, and even captives like Mali. All of these guests required lodging, meals, and laundry service, not to mention the ongoing needs of the large Vaudreuil family.

[Esther] was only one of a large number of captives, military officers, and diplomats staying at the Château Saint-Louis. In keeping with his own performance of nobility, Vaudreuil entertained his guests lavishly. A travel journal kept by John Livingstone, a New England diplomat sent to retrieve prisoners of war from the French governor in 1710, details the hospitality extended to official guests at the château, including several parties over the Christmas and New Year’s holidays.

Upon his arrival, Livingstone reports that Vaudreuil “received me with all imaginable marks of civillity, and ordered me lodgings in the fort in his house,” in addition to the loan of his sleigh and one thousand livres “to buy my selfe and servant cloaths.” (Livingstone had lost his wardrobe in a canoe accident on the way.) He knew he’d need something fresher than the shirt on his back, which he reports having “worne 44 days,” because of the weeks of winter festivities ahead. He reports that he “supped at ye Intendants,” a top colonial administrator, and there “was very hansomly entertained, ye Governor, Gentlemen, and Ladies of ye town were guests, and were diverted with musick and dancing.” The following night, “ye Governor treated nobly with musick and dancing.” Ten days later, Livingstone “sup’t this night at the Intendants, had a splendid entertainment with musick and dancing, and had ye drums and musick at my door.” On Christmas, “the Govr. Genll. [Vaudreuil] had a supper this night where were at least 50 persons of distinction, and ye whole entertainment in great splendour.” The following night, both Livingstone and the governor were back at the intendant’s, “where was much company, great plenty, with dancing and musick to admiration.”

Mali would not have met Livingstone at the château in the winter of 1710-11; by that time, she had already been enrolled in the Ursuline convent school for nearly two years.  However, she probably would have witnessed some of the entertainments that Livingstone describes, whose style is suggested by the watercolor above by George Heriot.  Although this dance was painted nearly ninety years after Mali lived at the château, it captures both the scale and elegance of the entertainment as well as its rusticity.  While grand ladies and gentlemen dance to music pounded out on a violin and tambourines, younger people gather at the margins to watch–including very young shoeless children and a dog.

Some of the dancing women are wearing the dernier cri in fashion at the turn of the nineteenth century, neoclassical dresses with the high “empire” waist.  These were meant to make women resemble Greek columns, and even in icy Québec, were made in lightweight, white fabrics like muslin or lawn, or in whisper-fine silks.  The gowns here closely resemble the ideal that was showing in Atlantic World fashion centers like Paris or London in 1801, so their presence in Québec of the neoclassical style at this date is a sign of the city’s wealth and style forty years after the British conquest.

But lawn and muslin dresses in Québec? Brrr.  The ladies would need shawls, spencers, and pelisses aplenty if they were to survive the climate, let alone the War of 1812.

6 thoughts on “Teaser Tuesday: What was it like to visit the Château Saint-Louis?”