Or, After Action Review for Parks as Portals to Learning–just a little taste of the ways in which military culture informs the history and present operations of the National Park Service.

My week up in Rocky, or ROMO (=ROcky MOuntain), another acronym used by Parkies, was a rich learning experience.  As a seventeenth- and eighteenth-century Eastern historian my expertise was fairly irrelevant, but I took the opportunity to learn about how the NPS works.  Besides keeping up with all of the military- and government-style acronyms (EIS, NEPA, EA , ETC) for the laws and procedures that structure the park’s conservation work, faculty from Colorado State and UC Santa Barbara helped CSU students think through the ways that environmental history informs and can assist natural resource preservation as well as the interpretation and visitor experience of the park.

The park managers that we met with on our first few days of the project, most of whom come from natural resource backgrounds like ecology and animal biology, were all generous with their time and offered to mentor any students who want to get into the NPS.  In contrast to academia, where mentorship is an ideal but doesn’t necessarily lead directly to a particular job or career, the NPS is like any other government agency:  if you get an internship or a seasonal job, meet a few people, and impress them with your work ethic and your ability to work as a team, you can find mentors who will help get you a permanent position.

Colorado State students, faculty, and NPS staff in the Parks as Portals to Learning workshop, 2016

This was all along one of the goals of Parks as Portals to Learning–facilitating relationships between our students and NPS staff to help them establish NPS careers, as well as showing Rocky staff how human history is relevant to their work as public lands managers and interpreters.  Interestingly, the Denver Post ran a story this morning about the Superintendent of Mesa Verde National Park, Cliff Spencer, headlined “NPS Superintendent started as an intern.”  The career path he describes in this interview is just another version of the stories we heard again and again from the Parkies up in ROMO.

The students prepared a Story Map of Horseshoe Park, which is just inside the Fall River entrance of Rocky and among the most intensively used spaces by human beings.  However, most traces of the human history of Horseshoe Park were removed or destroyed.  As a natural resources park (versus a historic park like Independence National Historical Park–in Parkie lingo, “INDE”–or Adams National Historical Park–“ADAM,” natch), evidence of human habitation and activity has been treated like an invasive species.  But in fact the area was home to a ranch in the 1880s-1906; a Dude Ranch for park visitors from 1906-1931; and a Civilian Conservation Corps (CCC) camp from 1933-1942.  Horseshoe Park has also seen tremendous changes to its ecology and management by humans as well as inundation by floods in 1982 and 2013.

The Parkies they met with turned out for their lunchtime presentation on Friday afternoon, in addition to several other staff and volunteers.  The six students did a fantastic job in just two and a half days of research and planning that kept them up past midnight Thursday as they polished their work.  It’s a rough ride as an advocate for cultural resources in a natural resource park like Rocky, but I think the work our students did may have helped to bridge this divide.

As for me?  I came away with lots of ideas for turning my material culture students in fall 2017 loose on the Mission ’66 collections in the ROMO archives.  I’ll say more on the controversy of Mission ’66 architecture and material culture another time, but just leave you with this:  I love Parkitecture, but let’s face it:  all material culture is a product of a particular place and time, not a natural or timeless expression of aesthetic values. 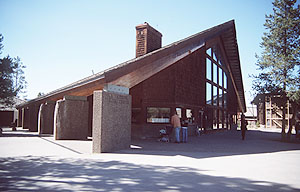 There’s nothing intrinsically more harmonious about buildings built in the early twentieth century as opposed to the 1960s or the 2010s.  The NPS should proceed with caution in its decisions regarding Mission ’66 buildings, which reflect park values and American ideals in the postwar heyday of automobile travel in the 1950s and 1960s.

I would have thought that Mad Men-chic in the past decade would have infected the NPS, but as the human history of managing nature parks lengthens, it’s up to historians to persuade them to see humans and the contributions they make as a native (as opposed to invasive) and necessary part of park heritage.