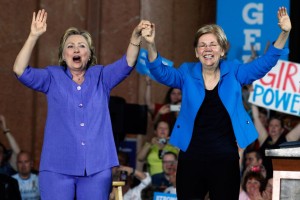 Commentators everywhere were amazed by the fact that Hillary Clinton and Senator Elizabeth Warren (D-MA) wore similar shades of blue at a campaign event last week in Cincinnati.  (Actually, I’d say Clinton’s suit was periwinkle, and it’s obvious that Warren is wearing only a blue jacket, not a suit.)

Nevertheless, we should consider the role of fashion choices in this election season.  After all, the choices our candidates make now are an indication of the looks we’ll have to see for the next four to eight years after the election.  My expertise in American history, women’s history, and the history of clothing makes me the perfect analyst of this important political question, It’s my patriotic duty this glorious Independence Day to share with you the results of my years of long study and reflection, plus 5 minutes of using Google images to look up photos of the presidents and vice-presidents of the last 5 administrations.

Prepare to be amazed, friends, by the results: 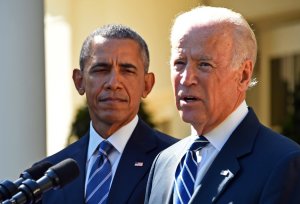 As you will see, the successful males of the species Homo Politicus take great care to dress and groom themselves individually and uniquely.  It’s an important symbol of their power and prestige as dominant males.  (The stripes slant the opposite ways–see?  It’s a subtle but incredibly important difference.)

It’s not just Democrats; Republicans too are very careful to wear distinguishing costumes and accessories.  President George Bush’s tie clearly shades towards severe gunmetal, while his Vice President wears powder blue, in a display of deference to his commander-in-chief. 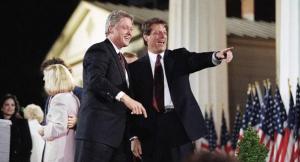 Going back into the 1990s, we can see that the staffs of President Bill Clinton and Vice President Al Gore also took care to ensure that their candidates were clearly distinguishable so as to avoid accusations of matchy-matchy mockery. 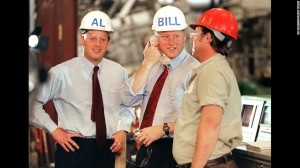 Even when they appeared outside of their traditional suitjackets, their clothing was separate and totally distinct, a unique expression of each man’s intimate true self as well as of their policy goals. 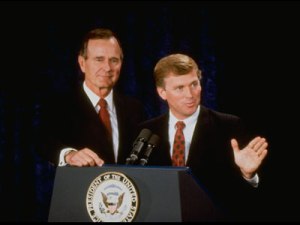 Of course, Bill Clinton and Gore were only modeling themselves on the administrations of the 1980s:  the staid George Bush I administration and that of the more fashion-forward look of his predecessor and running mate, Ronald Reagan.  Dan Quayle introduced a note of boyish insouciance in his choice of devil-may-care daywear, as you can see in this photo with George H.W. Bush. 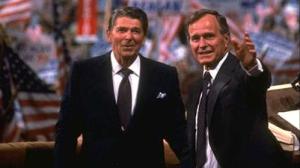 Ronald Reagan and George H.W. Bush were admired for their careful attention to detail of their fashion choices in the 1980 campaign (as seen here at left) and throughout their administration.  Pity the hapless staffer who failed to plan their suiting and tie choices in coordination with the other man’s advisers!  Permitting either man to show up at a campaign event, a cabinet meeting, or even at their private weekly lunches in anything with even a hint of the other man’s outfit was a firing offense.

Soingé Washington and the political commentariat would never stop chattering if presidents and their vice-presidents failed to coordinate their daywear and eveningwear choices!  Please, ladies, don’t fail this essential test of presidential leadership. 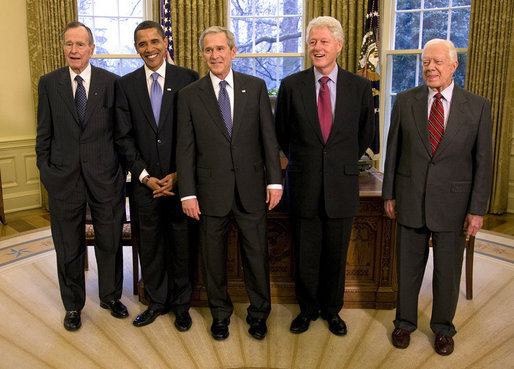 If Americans can’t look to the Oval Office for distinctive style and fashion-forward leadership, I fear for the fate of our republic.