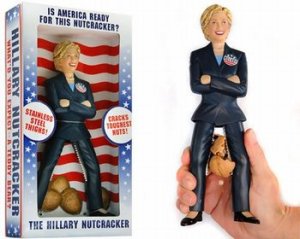 Hillary Clinton, running against a white man for the Democratic nomination, loses the support of white men.  But in the end, does it really matter?  When her opponent was a black man, she won white men by a country mile.  This says more about white men’s prejudices than it does about Hillary Clinton.

In any case, I’ve been frustrated by the tendency of the political media to treat white men as though they’re the real voters, the real Americans, and the rest of us as though our votes don’t really count the same.  It’s seen as “inevitable,” somehow, that Clinton wins non-whites and women of all ethnicities, whereas it’s a real achievement for Bernie Sanders or Donald Trump–two white men–to win a majority of white men’s votes.

Why does the white man insist on voting with his peen?  That’s unsanitary, as well as disgusting identity politics.

Part of this privileging of white men’s voting behavior is undoubtedly rooted in our history, because at first it was only white men who voted.*  For nearly the last two-hundred years–since 1828!–all white men regardless of wealth or property ownership have been entitled to vote in American elections by virtue of their race and sex.  Yes, being a white man meant that you were officially qualified as a voter from 1828 to 1870, and not being both white and male meant that you weren’t entitled to vote.

As most of you already know, the Fifteenth Amendment to the U.S. Constitution, ratified in 1870, removed the racial requirement for voting rights–at least officially, as we all know that the withdrawal of Federal troops in the post-Civil War South allowed old Jim Crow to move in and use extralegal violence to ensure that only white men exercised their voting rights until the passage of the Voting Rights Act of 1965.  White men in the southwest also moved to prevent Latinos from voting through intimidation and the passage of poll taxes.

Fifty years later, and nearly a century after universal white male suffrage, the ratification of the Nineteenth Amendment in 1920 meant that voting rights could no longer be determined by sex, so women were in theory guaranteed the right to vote in the United States.  Again, old Jim Crow moved effectively to limit the rights of African American women to vote in the former Confederacy for nearly another fifty years, and of Latinas in Texas and the southwest.

Considering the long and deep history we Americans have of promoting white men’s suffrage, and of being proud of white men’s voting rights, it’s probably not so surprising that “But what do the white men think?” is a guiding question in the minds of political journalists.  On the other hand, it’s been nearly a century since Congress ratified the voting rights of women, and fifty years since race was again deemed irrelevant to voting rights.

So my question is, when will we finally bow to the longue durée of the expansion of voting rights in this country?  It seems downright un-American not to.

*Except in New Jersey, which permitted all people who met the property ownership requirement to vote, including a few African American men and white women, until 1805.