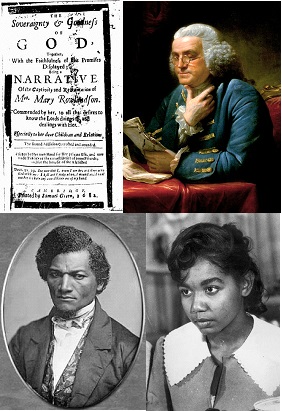 I’m not a traditional historian. I don’t give a fig about chronology except (maybe) in my “first half” (1492-1877) of the U.S. History survey class, and I never care about “coverage.” Maybe it’s my short attention span, but I go for books and ideas that intrigue me rather than the idea that I need to “cover” certain decades or themes in my classes.  The only kind of coverage I ever worry about is ensuring that my students are reading, hearing, and talking about as many different Americans as possible.  I try to ensure that we are reading and talking about women and men alike, and Americans of all classes and ethnic backgrounds.

More proof that I’m probably a bad professor: I write syllabi for the courses I wish I could have taken.  Selfish?  Guilty as charged.  But then I figure if I’m bored, how can my students not be bored too?  I’m just not that good of an actor.  Also, I’ve found that if it excites me (environmental history! material culture!), it’s probably going to interest the students more than a lecture or book I feel merely obligated to share with them.

Joseph Adelman has an interesting blog post over at The Junto about teaching a history course organized around four American autobiographies rather than rigid notions of “coverage” and chronology.  In a seminar for first-year students, I can see how it might be disorienting for them to jump from the 1670s (Mary Rowlandson) to the eighteenth century (Benjamin Franklin), and then to the nineteenth and twentieth centuries with two African American autobiographies, Frederick Douglass and Melba Pattillo Beals.  (He very generously provides a link to his syllabus, too.)

Adelman writes, “Both the students and I felt like we were missing something by not ever discussing the American Revolution, but for different reasons.”  I would argue that his choice of books minimized the importance of the American Revolution, so maybe skipping it this time makes sense.  After all, for three out of four of the people his students were reading about last semester, the ultimately conservative (if not revanchist!) revolution for home rule would have changed little if they were alive in the late eighteenth century.  The Revolution only began the process of emancipation for some enslaved people in a very limited region, and in fact accelerated the mass disenfranchisement and enslavement of millions with the expansion of the U.S. empire in the late eighteenth and early nineteenth centuries.  Free women’s rights were debated and discussed, but the one state Constitution that permitted women to vote after independence was declared (New Jersey) revoked that right shortly after the turn of the nineteenth century.

Let’s review, with the help of a soupçon–just a suspicion–of chronology over the longue durée of American history:  Voting rights for women in the U.S. weren’t realized until nearly 150 years after the American Revolution, and civil rights for African Americans weren’t even begun to be addressed until nearly 200 years after the Stamp Act crisis (in the 1964 Civil Rights and 1965 Voting Rights Acts.)  Fifty years later, amidst an epidemic of executions of young black men, women, and even children, many of us today wonder, after Douglass, what is the Fourth of July to an eleven year-old African American boy playing in a park with a toy gun, or to a seventeen year-old young man walking home from a convenience store with a bag of Skittles?

I’m not suggesting that that Revolution was entirely irrelevant to the ultimate successes of the emancipation, and our ongoing struggles for women’s rights, gender and sexual equality, antiracism, and civil rights–all successful rights movements in American history argue effectively that their cause is in line with the values and ideals that propelled the American Revolution.  (Witness the success recently of marriage equality versus traditional marriage–most Americans now see marriage and family relations as something that’s essential to liberty and equality.  Few of us buy the notion that being American means telling other people who they may or may not marry.)  But that’s because successful rights movements repurpose the language and ideals of the Revolution to suit their causes, not because those rights movements are somehow natural or logical outcomes of the Revolution itself.  If the arc of history bends toward justice, it’s because there are a lot of people pulling hard in that direction in the here and now.

I like the solution to any chronology anxieties that either instructors or students might feel from commenter History Underfoot:  “To get around the discomfort of not having chronology as the foundation, [one instructor] recommended the students create their own timeline, dropping in information as they learned it, sort of like a puzzle.”  In fact, I’m going to suggest to my students that they do this too.  Although I’m not big on chronology myself, timelines are a simple but highly useful DIY learning tool.

32 thoughts on “Chronology, “coverage,” and other pointless wastes of time for historians.”