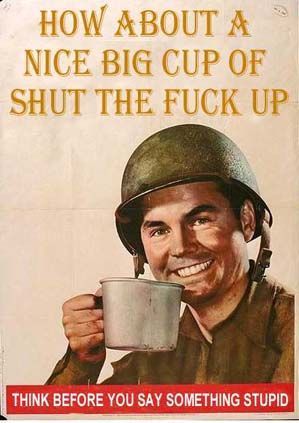 Ah, yes: freedom of speech. What some really mean when they evoke it is, “my right to have my say and not have you talk back,” like all of those crybabies who have cancelled their appearances at commencement ceremonies in the last few years because not every student and faculty member greeted their future appearance on campus with hugs and cocoa and slankets.

If you really believe in liberty of speech, then stop telling others to STFU.  In my view, the people who are being criticized most vigorously for speaking up lately at Yale and the University of Missouri are all too often quiet about their experiences, silent on campus, and eager not to draw attention to themselves, and it’s these students whose voices we need to listen to the most.

Too many people have zero imagination about what it is to be African American or Latin@ on a historically white college or university (HWCU) campus. But everyone who has ever attended or taught or worked at a HWCU knows that African Americans on HWCUs are viewed with suspicion just for being there, let alone when they try to unlock their own damn bikes or organize a protest about their marginalization.

I teach at a HWCU in Northern Colorado, a place that is increasingly Latin@ but has very few African American residents.  In my classes, my experience with non-white students in general, and African American students in particular, over the past fourteen years is that they go out of their way to be polite, inoffensive, unobtrusive, and try not to call attention to themselves in any way.  Their efforts to try to fly under the radar and evade notice grieve me, even as I think I understand their interest in remaining quiet and unobtrusive.  I work to offer a non-white perspective on history constantly, but I don’t know if I’m making it better or worse for my non-white students (or if they even care.) That’s the reality of attending a HWCU for the majority of black students in the United States:  working hard to get your degree, trying not be noticed, not taking up much space or speaking up in class.

So imagine my surprise that Alex Beam, a writer whose work I have admired for decades, unfortunately went down the Clueless White Guy path this week in The Boston Globe.  Note:  this is not the editorial page of the Wall Street Journal or of The Weekly Standard.

A Yale eminento asked me recently, What did you do in college, Alex? He meant what cool secret society did I belong to, did I play a varsity sport, or did I write for the newspaper. An embarrassing silence ensued.

In fact, I hung around the libraries and studied, because there was an excellent education laid out in front of me. So if Black Lives Matter chatterers came through the library chanting slogans and berating me for my skin color, as they recently did at Dartmouth — it wouldn’t have warmed me to their cause. Not then and not now.

I think we can call that a preemptive STFU.

How nice that the young Alex Beam found the library a warm and welcoming place for him to further his education!  How admirable he was to take advantage of it!  But how much easier was it for young Beam to study in the Yale library because he wasn’t eyed suspiciously by security guards when he walked in or arrested by a campus “police” officer at gunpoint when he walked out?  That happened this year, friends, at Yale, to another young man who was using the library on an early Saturday evening!  But he is black, and if his father wasn’t a prominent columnist for The New York Times, I’m sure we never would have heard about this unjust arrest.  Dog bites man, and all that.

Whiteness has its privileges, among which is the privilege to be taken seriously as an intellectual, to be seen as the model patron of a library, the rightful inhabitant of a university campus, never to be viewed as a security risk to other students for his mere presence there.  And according to Beam, it appears to include the right never to have his studies interrupted by “Black Lives Matter chatterers” or any other interlopers into the pristine university environment of his imagination.

Why shouldn’t student groups interrupt studies in the library for a few minutes, or ask for universities to rename schools and buildings after people who weren’t known for their active support for segregation, terrorism, or Civil War treason?  (Example:  Woodrow Wilson was racist and segregationist for his time, so why shouldn’t Princeton consider dumping some or all of his honors?)

Read that article on Wilson by Dylan Matthews :  Beam’s comment about Black Lives Matter echoes Woodrow Wilson’s tone policing letter to an African American Harvard alum protesting his introduction of segregation in the federal bureaucracy:  “‘If this organization is ever to have another hearing before me it must have another spokesman. Your manner offends me … Your tone, with its background of passion.'”  Sound familiar?

Oddly, throughout his article, Beam invokes his own father’s disgust (Princeton class of 1929) at the sex integration of Princeton.  As the kids say these days, that happened, and would anyone really make an argument that coeducation should be dropped?  Beam doesn’t, noting how much money Meg Whitman (Princeton class of 1977) has donated to her alma mater.  Beam is a smart guy:  why doesn’t he get that his complaints will be similarly regarded as the complaints against coeducation, back in the day?

I return to my prescription from earlier this semester:  don’t worry or bitch about imaginary “political correctness.”  Engage instead.  You just might learn something.

18 thoughts on “Who’s telling who to STFU at American universities? Observations on teaching at a HWCU.”