One of these things is not like the others.

Miss me, friends? I’m having a great time in the classroom again with my students, but clearly I need to figure out how it was that I was once able to manage my day job and to blog daily.  Maybe I was younger?  Maybe I felt like I had fresh ideas once upon a time?

Although I didn’t liveblog or Tweet about it, I watched the Republican debate Wednesday night from start to finish.  I thought it was both highly entertaining and permitted the candidates to stake out and articulate their positions.  There were some very important differences among the Republicans on the main stage–on federalism (good according to Mike “Two Buck” Huckabee when it permits a state to resist marriage equality, and bad according to Chris Christie when it permits Coloradoans to spark up without fear of Johnny Law), on U.S. borders and whether it’s good or bad to speak Spanish, on the previous decade-plus of warfare and other intervention in the Middle East, and on the most important question of the night:  whether to honor your wife or your mother by putting her face on a sawbuck.  (Srsly?)

I miss Rick Perry, but only because he was the closest thing to a handsome man anywhere near that stage.  I’ve also decided that Rand Paul looks like just about every boy I had a crush on in high school in the 1980s, with pretty much the same haircut too.  (Don’t judge.)

But this is a blog written by a women’s historian, and there is a woman running for President again on the Republican side, so let’s talk about Carly Fiorina and her interesting offensive on motherhood last night.  Amanda Marcotte wonders “What Was Up with Carly Fiorina’s Grisly Abortion Rant?” in the debate last night.  I don’t think it’s so difficult to guess–Fiorina is the only person on the stage who didn’t have children of her own.  While the male Republican candidates eruped in a patronizing ooze about their wives and families when given the opportunity to introduce themselves to the general public, each of them name-checking their wives and most listing their children by name, Fiorina was at a disadvantage in the DNA-bestowing contest.

She is not the first child-free woman in American history to run for President–Elizabeth Dole (R) had no children, and neither did Shirley Chisholm (D)–but it is unusual among the women who have run either for President or Vice-President in a major party in the past decade.  Republican Michele Bachmann has a large family of natural and former foster children, and Sarah Palin (R) has a famously prodigious brood.  By comparison Hillary Clinton (D) is an underachiever with only one child–but importantly, she has a child (and now a grandchild), and can claim the mantle of motherhood as much as Palin or Bachmann.

So Fiorina’s fantasies about Planned Parenthood’s butchery?  Pretty predictable for a childless woman who needs to court the votes of evangelicals and other religious conservatives–men and women who have at least rhetorically put family at the center of their lives, and who make no bones about the importance of family cohesion and respectability when it comes to their political judgment.  Her resume and family history–a twice-married CEO of a major tech company with no children–is not the kind of biography that most evangelicals and religious conservatives can relate to, especially in a woman.

More interesting to me was Fiorina’s invocation of a child she had buried because of drugs–a shock to me, because so far as I knew, she had never had children.  A quick trip to Wikipedia revealed that a stepdaughter had died at the age of 35 because of “alcoholism, substance abuse, and bulimia.”  I suspect that someone on the Fiorina team has curated this page, which also claims that Fiorina and her second husband Frank (the father of the two stepdaughters) “wanted to have children together but, as Fiorina put it: ‘That wasn’t God’s plan.'”

This is a gothic mobilization of unrealized children and a ghost stepdaughter:  they can be invoked as proof of maternal love and sacrifice, and will never talk back or be able to share a contradictory viewpoint.  And what kind of monster would ever question a mother’s invocation of her own sense of loss of the children she never had, let alone her grief as a bereaved parent? 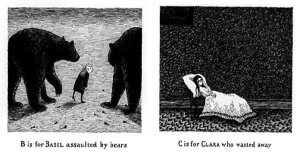 From The Gashlycrumb Tinies by Edward Gorey

These ghost children are almost even better than real children, who can get up to all kinds of inconvenient activities that fall afoul of Dad’s or Mom’s political positions–for example, Jeb Bush’s daughter Noelle’s well-publicized drug arrests while her father was Florida governor and all in on the drug wars and the carceral state; or the charges of animal cruelty against Mike Huckabee’s son David.

Let me be clear:  I don’t think Fiorina’s (or anyone’s) parental status is particularly relevant to their qualifications to be President.  I also believe that she may honestly grieve her stepdaughter and regret that children were not part of “God’s plan” for her.  But all candidates who have children talk about them and use them as props in their political campaigns.  Fiorina as a childless candidate, and especially as a childless woman, is in a difficult position.  Reassuring Republican voters about her devotion to children by invoking both fetal and maternal suffering may be the strategy she needs.  When you don’t have children, sometimes ghost children can do the same work.