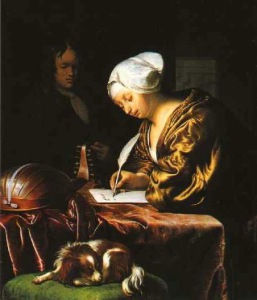 The title of this post refers to a 1998 essay by Francine Prose, “Scent of a Woman’s Ink:  Are Women Writers Really Inferior?”  Nearly twenty years later, the results aren’t encouraging for women.  Over at Jezebel, Catherine Nichols writes about sending out queries to agents for the same novel, with the same cover letter and writing sample, under both her real name and in the name of a male alter ego.  The results are even more depressing than you’d imagine (h/t Megan Kate Nelson for the RT that alerted me to this article):

The plan made me feel dishonest and creepy, so it took me a long time to send my novel out under a man’s name. But each time I read a study about unconscious bias, I got a little closer to trying it.

I set up a new e-mail address under a name—let’s say it was George Leyer, though it wasn’t—and left it empty. Weeks went by without word from the agents who had my work. I read another study about how people rate job applicants they believe are female and how much better they like those they believe are male.

Her hit ratio as Catherine was two requests to see the whole manuscript out of fifty queries, so 1:25 positive requests.  As George, her hit ratio was 17:50.  Nichols concludes that he is “eight and a half times better than me at writing the same book. Fully a third of the agents who saw his query wanted to see more, where my numbers never did shift from one in 25.”

I imagined him as a sort of reptilian Michael Fassbender-looking guy, drinking whiskey and walking around train yards at night while I did the work. Most of the agents only heard from one or the other of us, but I did overlap a little. One who sent me a form rejection as Catherine not only wanted to read George’s book, but instead of rejecting it asked if he could send it along to a more senior agent. Even George’s rejections were polite and warm on a level that would have meant everything to me, except that they weren’t to the real me. George’s work was “clever,” it’s “well-constructed” and “exciting.” No one mentioned his sentences being lyrical or whether his main characters were feisty. A few of people sent deeply generous and thoughtful critiques, which made me both grateful and queasy for my dishonesty.

Nichols is at first excited by these positive responses, then immediately furious that Catherine didn’t get the same positive responses and encouragement.  Even George’s rejection letters were warmer, more personal, and more encouraging than anything she got as Catherine.

To some degree, I was being conditioned like a lab animal against ambition. My book was getting at least a few of those rejections because it was big, not because it was bad.George, I imagine, would have been getting his “clever”s all along and would be writing something enormous now. In theory, the results of my experiment are vindicating, but I feel furious at having spent so much time in that ridiculous little cage, where so many people with the wrong kind of name are burning out their energy and intelligence. My name—Catherine—sounds as white and as relatively authoritative as any distinctly feminine name could, so I can only assume that changing other ethnic and class markers would have even more striking effects.

There’s a fundamental change in how I look at my work now, how I look at the novel I already wrote and the one that I’m working on now. I quit sending out queries entirely, and used the critiques that George got to improve the book—a book I would have put away in frustration long ago if I hadn’t tried my experiment. The edited draft went to the agent who now represents me, after she got in touch about a nonfiction piece I had written under my own name. Patience, faith, playing by the rules—the conventional wisdom would never have brought me here.

If I weren’t on vacation right now in a house with an electric range, I might go and pull a Sylvia Plath.  This really resonates with me.  I probably lost at least of year in the writing of The Many Captivities of Esther Wheelwright because of the negative or skeptical feedback I got from a senior male colleague I had thought of as a friend.  (It certainly makes me more sensitive to the weight my comments or advice might have on more junior colleagues now.)

This goes back to what I said a few weeks ago:  “listen to the critics who want to help you write the book you want to write, not the book they want you to write, or the book they wished they had written.  As for the naysayers:  everyone’s a critic, and unless you aspire to write the world’s blandest book, you’ll hear from at least a few.”

Every woman writer–fiction or non-fiction–needs to read and memorize this report.  Print a copy of it, highlight the parts that speak to you, and tape it up over your desk or writing space now.  Stick to your guns and write the big, bold, and ambitious book your wants to write.  (And try a masculine-sounding pseudonym, just for luck?  There’s a long tradition:  Currier Bell and George Eliot became some of the most celebrated writers in nineteenth-century Britain.  You could do worse–and if you’re writing under a woman’s name, you’ve probably already done a lot worse for yourself.)