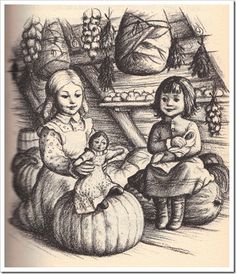 Today’s post is an unanticipated part III in my series Crossing Over, on writing and publishing an academic book that aims to be a “crossover” title with a popular audience.  Part I can be found here, “What is my book about?”, and Part II here, “Will I ever publish this book?”  Many thanks to those of you in the comments on those posts who encouraged me to write a Part III.  I hope to hear from the rest of you as to the writers and titles you see as your historical and literary models.

One of the challenges in writing The Many Captivities of Esther Wheelwright (Yale University Press, forthcoming 2016) was the fact that her life is very eventful early in childhood and adolescence, and then again in old age–a reversal of most biographies, which tend to focus on the adult years of a subject’s life, and offer only scant attention to their youths and their decline in old age.  But while her childhood was very eventful–taken captive at age 7, brought to New France at age 12, and announced her intention to become a nun at age 14–most of it before she enters the Ursuline convent as a student at age 12 is only very lightly documented.

How does one write the history of an eighteenth-century childhood, especially one almost entirely undocumented?  Although I was powerfully influenced by the historians I’ve been reading all my professional life, especially those who have focused on telling the story of a single life, I saw this as more of a literary problem than a historical one.  That is, I knew what I could do as a historian–I just didn’t know how I could bring it all together.  Or, as I wrote in part I of the Crossing Over series a few weeks ago:

I was sitting on a terrific story, but clearly I needed to decide how I wanted to tell it.  On the one hand, I wanted to reach a wider audience of readers outside of academia if possible.  But as a feminist scholar who has been very public on this blog about her critiques and concerns about her field, I also believed that this project could and should make important arguments to other scholars and students about what early North American history could be and the different stories we could tell if we only went looking for them.  I was especially clear about the feminist intervention that I thought the book could make.

Most of the historians who have written about the lives of the obscure had at least one major primary source, or a connection to a more famous early American, or both:  however spare and unyielding, Laurel Ulrich had Martha Ballard’s diary.  Annette Gordon-Reed had Thomas Jefferson and his abundantly documented plantation to help her tell the story of the Hemings family.  And Jill Lepore had Jane Franklin Mecom’s correspondence with her much more famous brother, Benjamin Franklin, in addition to the oceans of his papers and correspondence with everyone else in the eighteenth-century.  (I’m serious about this.  Ben Franklin’s graphomania is staggering.  I have stumbled across individuals in writing my book who have a few letters preserved because they were either to or from BF!  I bet we history nerds could play “6 degrees of separation to Benjamin Franklin” and have to work hard to find anyone in colonial North America beyond 3 degrees.)

For the first half of my book, I had just the story of a little girl, only occasionally told or remembered by an adult over the past three hundred years.  How could I tell her story?

So I looked to one of my favorite writers on the subject of early childhood, Laura Ingalls Wilder, and focused especially on Little House in the Big Woods to see how she introduced her readers to her child subjects.  (Pro Tip:  If you’ve never read this book and are curious, don’t even think of purchasing or borrowing an edition that doesn’t include Garth Williams’s brilliant and evocative illustrations.)  Little House focuses on the material culture of childhood as a means to bring Laura and Mary’s childhood to life:  and where they lived, what they ate, what they wore, the toys they played with.  (Longtime readers of this blog will not be surprised to hear this.  I’ve been dropping clues about this for years.)

Many of us who read this book as a child are left with indelible impressions of the Ingalls girls’ life and times in Wisconsin in the 1870s:  the inflated pig bladder balloon; the delicious roasted pigtail; the dusty, prosperous smell up of the cabin rafters where the dried and preserved food was stored; the grated carrot used to color Ma’s butter in winter; poor Susan, the corncob doll upstaged by Charlotte, the glamorous rag doll Laura gets for Christmas; Ma’s strawberry-patterned delaine, with its mouth-watering dark red buttons on the bodice; and the maple sugar candy poured on fresh snow. 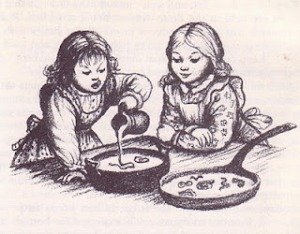 illustration by Garth Williams, Little House in the Big Woods, 1932

Oh, sure, there’s the story of when Ma slaps a bear, thinking she’s Sukey the cow, and the nasty, lying cousin who is stung all over by bees, but those singular moments weren’t my favorites parts of the book.  I liked the details of an everyday life so foreign to my 1970s suburban childhood.  I like them so much that not so long ago, I went out on a winter’s day and got a roasting pan full of snow, and proceeded to burn my three-year old’s arm with boiling maple syrup.  (As the kids say these days:  that happened.)

As a young reader, I also liked–and still appreciate–how Laura is always being told to sit still, play quietly, be ladylike, and how this is always presented as advice she’s straining against.  I think this is something that might be a truth universally understood about girlhood:  there’s always someone telling you no, because you’re a girl.

Little House is also cleverly designed to take the reader through an entire year with the Ingalls family, from autumn to autumn and harvest to harvest.  (Those of you who are familiar with the American Girl Doll books will recognize this trick, which I’m sure borrowed from Wilder’s series of books.  Each of their books takes on a theme in the life of a ten-year old girl:  birthdays, lessons learned, Christmas, etc.)

In many respects, the template set by Little House was instructive and useful, especially when writing about Esther’s experiences as a little girl in New England and then as an adolescent in New France.  The first three chapters feature Esther Wheelwright waking up variously in the Wheelwright garrison in Wells, Massachusetts (now Maine); in a Wabanaki wigwam on the Norridgewock River; and then in the Chateau St. Louis, the residence of the Governor of New France.  The focus on food–what they ate, how it was prepared–was fun to write.  (I’m afraid readers of my book are going to think I was rather hungry when writing about food, because I seem to enjoy writing about it so much!)

But the feeling of warmth and plenty that Ingalls evokes is really inappropriate to describing the experiences of the Wabanaki at the turn of the eighteenth century.  Allies of the French and hosts of several Jesuit missionaries, the Wabanaki had as a consequence suffered from two decades of warfare with the English.  The Norridgewock Wabanaki were burned out of their village in 1705, and spent most of the rest of the next decade fleeing the English from mission town to mission town in what’s now the Canadian provinces of Quebec and New Brunswick, and the U.S. state of Maine.  People whose primary concern is staying one step ahead of the enemy aren’t necessarily focused on getting corn into the ground or sticking around for the harvest.  As I discovered, the Wabanaki living in mission towns at the turn of the eighteenth century were starving, with the women and children suffering and dying of scurvy.

These were stories that the Little House model couldn’t help me with, edited as they were by Rose Wilder Lane, Laura’s libertarian-leaning daughter who shaped many of Laura’s books to make the Ingalls family seem more self-sufficient than they really were.

This year, I’ve decided to make storytelling a central part of my graduate readings course on early American history.  I’ve also assigned both Little House in the Big Woods and Louise Erdrich’s The Birchbark House, the inaugural novel of a series that was conceived as a Native American response to the Little House series and its white pioneer nostalgia.  Erdrich opens in The Birchbark House with trauma, and doesn’t flinch from telling the story of Ojibwa survival in the nineteenth century.  Like Little House in the Big Woods, Erdrich organizes her book around the four seasons, strategies for getting food and shelter, and dealing with the pressures of colonialism exerted by families like the Ingalls.

I’ll let you know what my students make of this exercise.  It may be a complete bust!  It may be (like my maple candy-making expedition) an exercise in nostalgia for their own childhoods.  It could be a brilliant mistake.  Who knows?  As a sign I just put up in my office says, “in order to live a creative life, we must not fear mistakes.”

It’s good advice.  I just might take it.  What have we got to lose?  Or more importantly, think of what we might gain!

29 thoughts on “Crossing over, part III: The uses and limits of literary models”