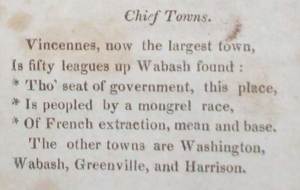 Over at Chancery Hill Books, Tom Bredehoft wrote a few posts this week about collecting books and the ways in which his book collection has shaped his scholarship.  He wonders, “Why aren’t literature professors also book collectors?,” when his research has been immeasurably enriched by his book collecting and bibliographic interests:

Being a book collector has given me a far broader experience of books and their texts than my academic training or my academic pursuits alone could have done. Of course not every book I’ve collected will end up playing a role in the academic arguments I make, but that’s precisely the point: I do not know which books I will use until I use them. But I do know that I will probably not use a book I am not at least somewhat familiar with.

Do some of you collect books?  If so, what role (if any) have they played in the rest of your work or professional life?  I confess that I buy old books, but only if they’re of personal or professional interest.  I’m not into book collecting for the sake of collecting rare or important books, but I like to think that my purchases and careful stewardship of my books may someday be appreciated by antiquarians, bibliophiles, or even historians in the future.

I was particularly interested in Tom’s report on Victorianus Clark’s A Rhyming Geography; Or, a Poetical Description of the United States of America, &c. (Hartford: Peter B. Gleason & Co., 1819,) which looks like a fascinating document.  It recalled in my mind Kariann Yokota’s fascinating discussion of early American maps and geographies, which continued to plagiarize and reflect British referents and sensibilities for decades after the American Revolution.  Clark’s pedagogically innovative Rhyming Geography appears to flow from this vein as well–check out this discussion of Vincennes, Indiana:

Vincennes, now the largest town,
Is fifty leagues up Wabash found:
*Tho’ seat of government, this place,
*Is peopled by a mongrel race,
*Of French extraction, mean and base (78)

Longtime readers may recall that I’ve written about Vincennes, Indiana here–and more particularly, about turn-of-the-twentieth century Colonial Revival and its tendency to romanticize its roots as a French fort, as exemplified by an old popular novel, Alice of Old Vincennes.  You have to appreciate the vicious anti-French (and anti-Catholic) bias of the British in the long eighteenth century:  it’s nothing if not remorselessly consistent.  But, hey!  the kids weren’t supposed to memorize the verses preceded by an asterisk–those were just added for local color.

Most Anglo-Americans in the eighteenth, nineteenth, and yes, even the twentieth century have (per Yokota’s argument) been happy to join in the anti-Gallicism and especially the anti-Catholicism!   Think about how useful anti-Catholicism has been for nativists over the centuries, an all-purpose hatred that can change with the times.  When the French were no longer a political or military threat, then the Irish came along!  After the Irish were integrated into Eastern municipal political machines, here come the Italians, the Polish, and all along, the Mexicans and central Americans. 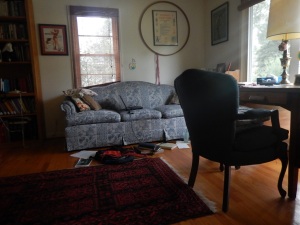 Where the magic happens (on an unusually dull summer day.)

As I was searching for Kariann’s book on my groaning bookcases here in the home office, I was reminded yet again that 1) it’s time for another culling of the herd, so to speak, and 2) it’s time for me FINALLY to reorganize, paint, and properly decorate this place.  Soon I will have published two books out of this office in fourteen years, so I think it’s time to treat myself to some interior decoration.  Don’t you agree?

I’m not sure what role new bookcases or shelves will play in all of this.  I fear that adding a new bookcase or two is like trying to solve your traffic woes by adding new lanes to the freeways:  you can’t build your way out of the problem, friends.

13 thoughts on “Book collections: his, mine, and yours? Also, my plans for a home office rethink.”