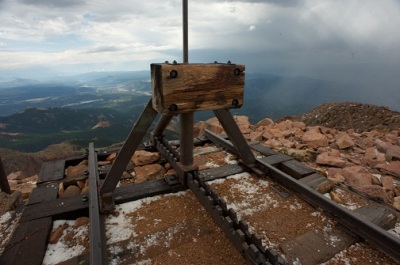 End of the cog railway on Pike’s Peak in Colorado

I’m in the last six weeks of completing my second book (and third monograph!) and the end of my last research trip to Québec, so it’s the end of the line for me.  As much as I’ve been itching to get this book done, it’s a little sad now to think of not returning to Québec.  It’s too bad, because I’ve got the condo situation sussed out, my favorite épiceries and boulangeries figured out, the vagaries of seventeenth and eighteenth-century French navigated, and now this information will become irrelevant to anyone (including me) in the next few years.  Isn’t it always the case that just as we get good at something, it’s time to wrap it up and move along?

I guess the only way to avoid this feeling is never to finish a project, which is just a bridge too far for me.  I take pride on being the kind of historian who can get stuff done, get it out, and move along.  I’m a perfectionist, but I also recognize that there is such a thing as the best book I can write right now.  I just can’t nibble a project to death.

All this week, I’ve had two alternating thoughts as I’ve reviewed some of the archival material I’ve taken notes on already, as well as a few new items:  first, omigod, how did I miss this the first time around??? and next, OK, this helps you and merely adds a few choice details to the story you’re already telling.  Still, don’t most of us wonder how many wonderful, awful stories we’ve missed? 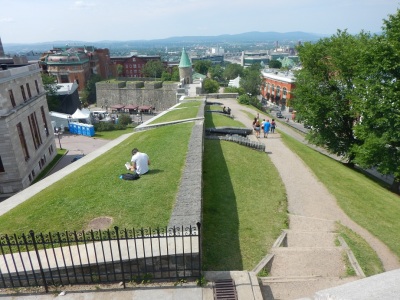 It’s a lovely afternoon–breezy and warm, not too humid.  I’ve got my feet up and am enjoying a glass of vin rosé.  There’s a big Fête d’été here this weekend, so I might just put my sneakers back on pretty soon and head out to hear what I can hear.  The Tragically Hip are playing tonight–seems a fitting way to end this last trip to Canada, for at least a little while.  Maybe I’ll go down there and see the other geezers that show up for this gig, especially considering who paid for my plane ticket to Québec in the first place.    (But more on that later.)

You know me, friends:  I can get behind anything.