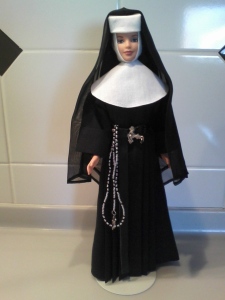 Some of us had a little doll-related fun on Twitter today. Liz Covart  (of Benjamin Franklin’s World) went in search of Betsy Ross Barbie, and was amazed to find it; Marla Miller, who first tipped us off to the existence of this Barbie, suggested that we all immediately Google “George Washington Barbie,” which of course we did.

I’ve got a barbie none can beat, friends–my Ursuline Barbie!  But enough about my dolls; I’m here to tell you that I’ve been thinking about all of my book-related dolls and historical dolls in general while I’ve been walking around Québec this week, as Québec (like France) seems to have a weird fascination with both larger- and smaller-than-life representations of the human form.  That is to say, I’m a huge fan of dolls, and even I’m a little creeped out by it. 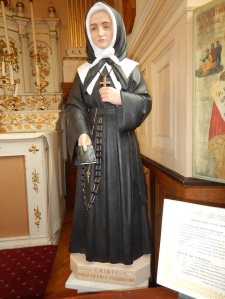 Some of this no doubt has to do with me and my non-Catholic upbringing confronting the aggressively Catholic culture of visual representation of holy and virtuous figures.  I’m down with it–statues like this one commemorating not just Catholic religieuses but also national heroes like Congregation de Notre-Dame nun Marguerite Bourgeoys, are all over the place.  They’re in bronze on the Parliament building; they’re in every Cathedral, church, chapel, and gift shop.

Seriously:  walking around the antique stores on Rue St. Paul, most (if not all of them) feature not just children’s dolls for play, but loads of doll-sized statues of adults–mostly religious figures, but also just people in everyday life.  I wanted to take pictures of them, but the glare on the shop glass would not have showed them well.  No Infants of Prague that I saw, however–my favorite kitschy Catholic doll.

This kind of freaked me out:  the larger-than life terror-muppets like these in the Cathedral of Notre-Dame de Québec.  They’re meant to commemorate Québec’s patrimoine réligieux and the life of St. François de Laval in particular by representing (L to R) an Ursuline nun, a Jesuit priest, and an Augustinian nun.  Kudos to the Cathedral for remembering the women of this city who did so much to propagate and preserve Catholicism over nearly 400 years! Go ahead and click on that picture on the right–I dare you!

And let’s not even get into the interesting secular public art in this city.

9 thoughts on “Nun can compare to super-weird George Washington Barbie (or can they?)”