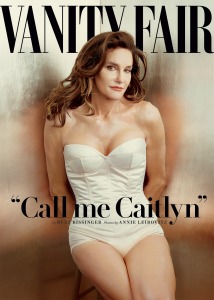 One of the things about L.A. I’m really going to miss is reading the shrunken, vestigial, adware-addled Denver Post instead of the rich and lively LA Times, and one of the writers I’ll miss most is art critic Christopher Knight.  Here’s his review of Caitlyn Jenner’s big reveal portrait by Annie Leibovitz on the cover of Vanity Fair published yesterday.

For all the advance buildup, the picture feels flat — a pedestrian celebrity pastiche of rather tired visual cliches. That’s too bad. Jenner’s courage in taking control of the public process of coming out as transgender is bold, and this will be the most widely seen initial image.

[T]he Vanity Fair photograph seems a missed opportunity — a picture from the past rather than the present. Maybe that’s because all its conventional, glamour-girl signals weigh down the lively fluidity swirling at the center of gender identity.

After describing work by photographer Catherine Opie and Judith Butler, and explaining that a more expansive and complicated vision of gender performance has been part of both the feminist and LGBT movements’ DNA since the early 1990s, Knight writes that the VF cover appears to have missed these conversations entirely.  Instead, it’s a portrait of a 60-something woman by a 60-something woman that feels dated and conventional.  “Leibovitz’s Caitlyn Jenner is a newfangled Vargas girl, one of those airbrushed cuties from the old pages of Playboy. Is that all there is?”

As someone who regularly posts pinup cowgirls produced in the middle of the twentieth century, you’d think I might take offense, but I agree entirely.  (This is a history blog, not a modern magazine!  Also, whatever you might want to imagine, I’m much more conservatively kitted out than those cuties on my blog.)

Knight’s review reminded me of one of my favorite Nora Ephron essays of all-time, her 1974 review of pioneering transwoman Jan Morris’s memoir Conundrum.  Anticipating Butler’s and other 1980s and 90s feminists’ notion of gender as performance, Ephron noted that she read Morris’s book “with a great deal of interest, largely because I always wanted to be a girl, too.”  But the feminist writer was appalled by Morris’s embrace of every cliche of womanhood:  “Jan Morris is perfectly awful at being a woman,” Ephron wrote. “What she has become instead is exactly what James Morris wanted to become those many years ago. A girl. And worse, a forty-seven-year-old girl. And worst of all, a forty-seven-year-old Cosmopolitan girl.”

Knight seems to be suggesting the same thing:  why are our imaginations of “the feminine” so limited and conventional?  This is not just a Morris or a Jenner or a transwoman problem–their self-representations are shaped not just by what they see as feminine, but also what the larger public, celebrity photographers, and mainstream magazines believe will sell as a performance of embodied womanhood.

Knight acknowledges Jenner’s courage in making a later-in-life transition, and also that there are other possible readings of her portrait by Leibovitz:

One woman picturing another (also “of a certain age”) as a standard sex symbol does nicely smudge conventional strictures around bodily shame. And what happens to established theories of the male gaze when a transgender woman is photographed by an artist who may have been shy to identify as a lesbian, while happy to celebrate being the lover of the late Susan Sontag, the cultural critic whose book “On Photography” is standard reading?

In the end, though, Knight concludes that “a rather momentous social and cultural event seems somehow diminished by representation as a mere me-too pinup picture.  Jenner has set out on a rocky path that many before her have taken, but the global celebrity that preceded her transition is distinctive. A similarly singular quirk is missing from her decidedly ordinary portrait photograph.”

34 thoughts on “Caitlyn Jenner portrait “a picture from the past rather than the present.””