Today’s post is a query from a reader about children’s books related to one’s field of history.

I don’t know if this would interest you, but I’m stumped on my own. A colleague is having a baby, and another colleague is hosting a department shower. The host has requested that we each, in addition to any other gift, bring a book for the baby’s library. Specifically, something related to our field of history.

I think it is a lovely idea, but I have no idea if there are good, current children’s books in my field, which, broadly construed, is American Women’s History. Do you think your blog readers would have ideas?

Would this interest me?  It’s been a subject that, for a number of mundane reasons, has been at the front of my mind for at least the last decade.

The books that occur to me are my sentimental favorites, the Little House series by Laura Ingalls Wilder.  (If you get these books, you must get the editions with the Garth Williams illustrations.  Full stop.)  I’d also recommend as a corrective to the anti-Native American racism in those books Louise Erdrich’s The Birchbark Canoe.  These books are interesting because they’re about not just females, but little girls, and I think children are always interested in reading about other children’s experiences.

As I re-read the first book in Ingalls’s series over the past several years, it became something of a model for the book I wrote about Esther Wheelwright because of its focus on things close to the body that all children can relate to:  what they wear, what they eat, what they play, and where they sleep, etc.  In fact, I’m considering using both Little House in the Big Woods and Birchbark Canoe in my early American women’s history class the next time I teach it in an exploration of narrative and voice in writing girls’ histories.

Another book I remember fondly, although it also reflects a white, mid-twentieth century view of race, is Elizabeth George Speare’s The Calico Captive, which was based on the experiences of the Johnson family during the Seven Years’ War as described by Susannah Johnson in her captivity narrative.  (I have written here recently about the experiences of her little boy, Sylvanus, but the main character in Speare’s book is Johnson’s teenaged sister, not one of her children.)

Finally, I’ve found all of the American Girl series of books to be pretty well done–the ones I’m most familiar with are (perhaps unsurprisingly) Josephina, Caroline, and Felicity.  Their stories are written to a formula on the experiences of a year in the life of a ten year-old, but they offer rich details about material culture and the expectations of family and community life for the different girls.

For modern women’s history and for slightly older readers (i.e. tweens and younger teens), I would recommend the Aya series of graphic novels (Life in Yop City and Love in Yop City) for its fascinating stories about teenaged and young adult women in Ivory Coast in the 1970s.  There is also a wonderful graphic novel on the life of Margaret Sanger by Peter Bagge called Woman Rebel.  All of the titles mentioned in this paragraph are somewhat sexually explicit, so you might want to give the parent advance warning, but there’s nothing exploitative or sensastionalized about the representations of sex and its consequences from various women’s points of view.  (Because they reflect women’s points of view, they’re mostly about the consequences of sexual contact.)

Well, friends, any ideas?  I’m sure the writer would welcome any suggestions, either in an American women’s history vein or historical books for children more generally.  If you don’t have any ideas, you can gaze at these lovely photos of the passing scene here in California taken over the holidays.  I’m sure baby would love the car.  (Indeed, who wouldn’t?) 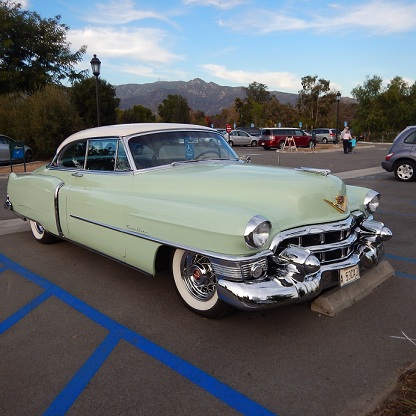 Vintage Cadillac parked at the Huntington Library and Gardens, January 7, 2015

29 thoughts on “Books for babes, and more SoCal beauty for those of you still suffering from the Alberta Clipper”