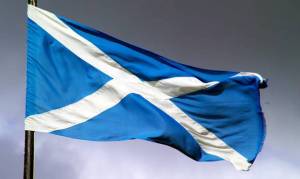 Are any of you following the Scottish independence referendum?  It’s a surprisingly big deal around the Huntington, which being a kind of monument to the “special relationship” between the United States and Great Britain in terms of its art, manuscript, and bibliographic collections, is loaded with British people and British scholars, always.  Opinions here vary as to how it will go, and how it should go.  I expect that the results will be some time in coming–it’s early evening in Britain now, but the polls don’t close until 10 p.m. there, so even with an immediate overnight count we may not know until late tonight or early tomorrow morning Pacific Daylight Time.

I was agnostic on the question, being neither Scots nor British nor a British studies scholar, until I saw that Niall Ferguson has been urging a “nae” vote.  Today, he claims that “Alone, Scotland Will Be a Failed State.”  Right.  Just like Canada, the U.S., New Zealand, and Australia!  Failed states, all of them, even the U.S. with its tragic adoption of Euro-style socialised medicine and Afro-style Kenyan anticolonial presidents.  Wait–did you see that?  Even the spelling around here is getting socialised–I mean, socialized!  Good God.  But knowing where Ferguson stands is really clarifying:  as a reflexively Tory doomsayer he’s so spectacularly wrong about everything all of the time, it made it easy to root for an “aye!”

Whatever makes the Scots happy is fine by me.  I really enjoyed Scotland the one time I visited, a whirlwind trip to Glasgow, Edinburgh, and Stirling in 2001.  It struck me that Scotland in the summer was the perfect place to finish writing a book, because it’s light until 10 p.m. or so, and it rains a lot, so you’d have little to do but finish the job you came to do.  I also really liked the haggis, which I tried at several different restaurants and pubs, so go figure.