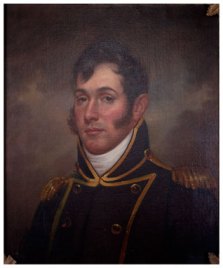 Today is the bicentennial of the Battle of Lake Erie, 27-year old Oliver Hazard Perry’s unlikely victory over the British fleet in Lake Erie during the War of 1812.  The fact that the commander of the U.S. Navy in Lake Erie was 27 years old is a sign of just how desperate and underdeveloped the Navy was in 1813!  Nevertheless, his confident (and only slightly boastful) statement that “we have met the enemy, and they are ours,” is remembered today, especially by people who live near Lake Erie.  And, it was probably for the best that the Navy got its use out of him while young, as it did with most of its seamen, as he died of yellow fever at the age of 34 in 1819.

You can read more about the battle and its re-enactment on Labor Day this year at The Battle of Lake Erie Bicentennial webpage, complete with a video of the replica of Perry’s ship The Niagra.  (Unfortunately, it’s marred by using that hideously ubiquitous song by “F.U.N.,” which is pretentious and overplayed.)  They’ve set up a Twitter account for the old commodore, and there’s more information about the battle at “The” Ohio State University’s Stone Laboratory, a freshwater research lab on Gibraltar Island in Lake Erie.

It’s interesting to note that Perry’s portrait was done by two early American artists, by Rembrandt Peale (1778-1860) in life shortly after Perry’s victory, and by Jane Stuart (1812-88), daughter of Gilbert Stuart, posthumously in the late 1850s.  Perhaps unsurprisingly, Stuart’s posthumous portrait is much more popular on the interwebs, as it portrays Perry much more effectively (if less accurately) as a Regency naval hero who looks like he could have stood for Jane Austen’s Captain Wentworth in Persuasion.