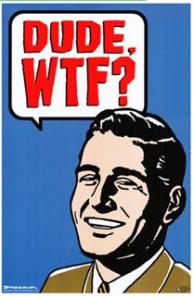 Drat!  My nefarious radical plot to start a “sex week” at Baa Ram U. has been discovered.  Behold!  A viewer named Bruce, who apparently writes like a blog SPAMbot, has caught me out:

I heard your classroom teaching “clothes of the 17th-18th century” It sounded like you were obsessed with breasts, and fully made that your focal point to those innocent brains of the all female class.* NO-not all slaves walked around bare breasted, and in fact, few ever did if you researched the truth.** Just why in the hell have you made this your theme in the class instead of talking about basic items, like dresses, suits, dress up ideology in those days.*** You must be one of those liberals trying to start a sex week on campus there?****

And it would have worked too if it weren’t for those meddling C-SPAN 3 cameras!

On a more serious note:  my C-SPAN lecture has re-opened my eyes to the power of television.  Each weekend my lecture aired, I got 3-4 emails from members of the public, all of which were highly complimentary and/or wanting to engage me on a question or comment that interested the writer (except from the one above, obviously.)  Even a cable channel with a relatively modest audience reaches so very many people by comparison to any other public lectures I might give, or my blogging, needless to say.

*For the record, the class had 26 women and 2 men enrolled, and they were all present on the day of the recording.  But, you got me, Bruce!  I am “obsessed with breasts,” just like almost every heterosexual male scholar.  I guess my mistake was historicizing and interrogating that “obsession” instead of just letting it rattle around in my pornographic imagination and/or personal collection like more decent historians.

**I was talking about representations of African American women versus white women, not necessarily their daily lived reality.  But thanks for your helpful suggestion that next time I “research the truth.”  I’ll bookmark that one, for sure.

***My hell of a reason is that this was class not about clothing, but rather a class on women in American history.

****What is “a sex week on campus?”  Seriously.  (And who thinks that we need to have a dedicated “sex week” in order for students to think, talk about, or engage in sex?  Back in the day, I thought “sex week” was every week in college, but maybe I just had a much better time in college than you did.  Quelle suprise.)

23 thoughts on “At last! Mansplanations from an angry C-SPAN 3 viewer.”