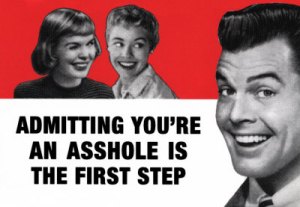 Some of you have probably heard of Geoffrey Nunberg’s Ascent of the A-word:  Assholism, the First Sixty Years (2012) because of his platform as the resident linguist for NPR’s Fresh Air.  A few weeks ago, we learned that Aaron James, a philosophy professor at the University of California, Irvine, published a book in 2012 called Assholes:  A Theory, and this article describing James’s book made me laugh out loud:

So what is an asshole, exactly? How is he (and assholes are almost always men) distinct from other types of social malefactors? Are assholes born that way, or is their boorishness culturally conditioned? What explains the spike in the asshole population?

James was at the beach when he began mulling those questions. “I was watching one of the usual miscreants surf by on a wave and thought, Gosh, he’s an asshole.” Not an intellectual breakthrough, he concedes, but his reaction had what he calls “cognitive content.” In other words, his statement was more than a mere expression of feeling. He started sketching a theory of assholes, refining his thinking at the Center for Advanced Study in the Behavioral Sciences at Stanford, where he spent a year as a fellow in 2009.

Now here’s the part I really like as a historian.  James pushes beyond the linguist’s focus on the word to explore the history and philosophy of the asshole avant la lettre:

He consulted Rousseau (who, James notes, was something of an asshole himself on account of his shabby parenting skills), Hobbes (especially his views on the “Foole” who breaks the social contract), Kant (his notion of self-conceit in particular), and more-recent scholarship on psychopaths. He spoke with psychologists, lawyers, and anthropologists, all of whom suggested asshole reading lists. “There are a lot of similar characters studied in other disciplines, like the free rider or the amoralist or the cheater,” James says, calling his time at Stanford an “interdisciplinary education in asshole theory.”

James argues for a three-part definition of assholes that boils down to this: Assholes act out of a deep-rooted sense of entitlement, a habitual and persistent belief that they deserve special treatment. (Nunberg points out that use of the phrase “sense of entitlement” tracks the spread of “asshole”—both have spiked since the 1970s.) How to distinguish an asshole from a scumbag, a jerk, a prick, or a schmuck? Assholes are systematic. We all do assholeish things, but only an asshole feels fully justified in always acting like an asshole. As James puts it, “If one is special on one’s birthday, the asshole’s birthday comes every day.”

Add these two books to Robert I. Sutton’s The No Asshole Rule, and you’ve almost got yourself a syllabus.  Please offer your suggestions for a bibliography in critical asshole studies in the comments below, as well as your nominations for the assholes who made 2012 the year of the asshole.

Jean-Jacques Rousseau was definitely a major asshole, as is Todd Akin, my nominee for Asshole of the Year, 2012.  Interestingly, their shared assholery is rooted in their misogyny and their cruel sense of entitlement personally to control women’s bodies and the conditions of their motherhood.  (Aiken of course insists on criminalizing abortion while implying that not all rapes are “legitimate,” while Rousseau simultaneously advocated the breastfeeding of infants while also insisting that his servant-woman/paramour give up at least five of their children to foundling hospitals!  Talk about assholes!)

Coincidentally, 2012 was the 300th anniversary of Rousseau’s birth.  How sad that his views of women haven’t been extinguished in a new and improved Age of Reason, but rather became foundational to modernity itself.