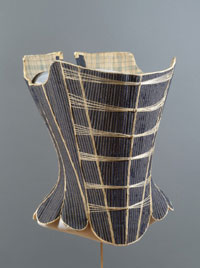 You can see me lecturing to my HIST 358:  American Women’s History to 1800 students from this semester on the politics of early American women’s underwear (srsly!) on C-SPAN 3, American History TV, this weekend.  I’m on Saturday 8 p.m. EST/6 p.m. MST, again on Saturday at midnight/10 p.m., and Sunday at 1 p.m./11 a.m.  If (like me) you don’t get C-SPAN 3, it streams online over the weekend, too.  I also throw in some bits about the 600-year old bra, John Paul Gaultier, and Madonna into the lecture, just for laughs.

(Amazingly enough, there is a blog called Eighteenth-Century Stays, where you can see more photos like the one’s I’ve borrowed here, as well as other examples of both eighteenth- and seventeenth-century stays, with instructions for how to make them yourself.) 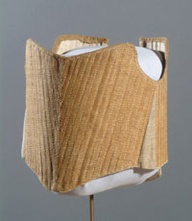 How did I get interested in early American undergarments, and why on earth do I think this is an appropriate subject for an undergraduate student lecture?  I’ve always had a personal interest in clothing and fashion, and wrote both an article and a chapter in Abraham in Arms on the stripping and redressing of war captives of Indians and the many meanings of the exchange of clothing between English and Native peoples in the colonial northeast.  In researching my current book, which is in large part about a child (Esther Wheelwright, 1696-1780) whose life is largely undocumented by traditional historical sources, I decided that thinking about her bodily experiences through the material culture of early American childhood was perhaps one way to think about her life.  Young children are very in touch with their bodies’ immediate needs, and the first half of my book follows Wheelwright from age 7 to 14:  what did she eat?  Was she hungry?  Where did she sleep, and with whom?  What would a Catholic Mass have looked, sounded, and smelled like to her?  And above all, what was she wearing as she crossed from an English garrison to a Wabanaki village, and from the Wabanaki village into the Ursuline convent school in Quebec?

My investigations of material culture made me think that my students might be interested in and benefit from the same exercise, so I added this lecture to my women’s history course and my colonial North America course.  This lecture is in fact an illustration of how a professor’s research interests directly enrich her teaching and benefit her students.

A note on the “classroom” in which we were recorded:  it’s not the real deal.  Our classroom was a charmless, windowless, yellow-painted cement block hellscape, freezing cold year-round (which I will admit is better than hot, and I’ve worked those rooms too), whose internet connection just fritzed out inexplicably less than halfway through the term.  That’s the kind of pull we lazy, coasting tenured radicals have in Colorado.  What you’ll see on the teevee ain’t exactly glamorous, but it is a room that’s been rehabbed sometime since I graduated from college.  But, my classroom had three things going for it:  location, location, and location.  It is about 60 steps from my office, and especially convenient when teaching there in January and February.  And much as I hate to say it, it’s not the worst classroom I’ve ever been assigned!

I don’t think I can bear to watch it, but you can tune in and judge me, if that’s your style.  Here’s a brief bibliography of all of the books that helped me pull together this lecture and provide context for it:

26 thoughts on “The big reveal! Historiann has a face for C-SPAN 3.”