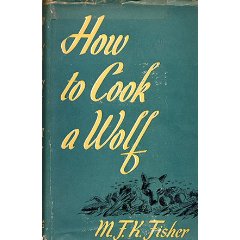 Today’s post is a recipe cribbed from M.F.K. Fisher’s How to Cook a Wolf (1942), which I reviewed here a few years ago and did not love.  However, this recipe stuck with me, because it seems like an ingenious way to make a cake without butter or eggs:  hide the use of sub-standard fat with gingerbread spices!  (And/or ganja, or as M.F.K. Fisher herself would say, “what have you.”)

Now to the recipe and its explanation:

Coffee, when it is brewed intelligently, is a perfect accompaniment to any dessert, whether it be a Soufflé au Grand Marnier, or a bowl of frost-whipped Winesap apples, crisp and juicy.  It is good, too, with a piece of fruity cake, and here is a recipe for one which is foolproof to concoct, and guaranteed to make the world take at least two steps back, instead of one step nearer.

It is a remnant of the last war, and although I remember liking it so much that I dreamed about it at night. . . like all the other children who ate it, I can’t remember that it was called anything more appetizing than

1/2 cup shortening (bacon grease can be used, because of the spices which hide its taste)

Sift the flour, soda, and baking powder.  Put all of the other ingredients in a pan, and bring to a boil.  Cook five minutes.  Cool thoroughly.  Add the sifted dry ingredients and mix well.  Bake 45 minutes or until done in a greased loaf-pan in a 325-350 degree oven.

War cake can be made in muffin tins, and baked more quickly, but in a loaf it stays fresh longer.  It is very good with a glass of milk, I remember.  (I am sure that I could live happily forever without tasting it again.  There are many things like that:  you recall with astonishment and a kind of admiration some of the things eaten with sensual delight at eight or eighteen, that would be a gastronomical auto da fé for you at twenty-eight, or fifty.  But that does not mean that you were wrong so long ago.  War Cake says nothing to me now, but I know that it is an honest cake, and one loved by hungry children.  And I’m not ashamed of having loved it. . . merely a little puzzled, and thankful that I am no longer eight.)

I like how she describes her love of the cake like a former lover one has long since outgrown:  “not ashamed of having loved [hir]. . . merely a little puzzled, and thankful that I am no longer [that age].”  But that does not mean that you were wrong so long ago.

Let us cast aside childish things for something richer and more sophisticated.  Here’s the recipe for Nigella Lawson’s Sticky Gingerbread, of which I am very fond, and of which War Cake is a very distant cousin from the previous century (and probably the century before that one).  It keeps well, is good for gifting, works after dinner or for breakfast the morning after, and needs just a dusting of powered sugar to dress it up.  (Note the similar methodologies in both recipes–both call for simmering or boiling the sugars, fats, and spices together before mixing in the flour, a classic gingerbread technique.)

What’s your usual holiday dessert?  Will you be making or baking it this year?

19 thoughts on “Cake Week, Tuesday edition: pull up a chair for coffee and War Cake”