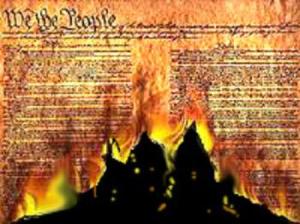 Unlike Tenured Radical, I’m not in Milwaukee right now, but l’esprit de l’Historiann lives there, apparently!  A correspondent writes that at an Organization of American Historians panel yesterday on the Revolution and its public memory:

Your name came up by Fitz Brundage, the panel’s chair: your memorable line begging historians to stop writing hagiographic books about the founding fathers. Big, appreciative laugh in the room.

I don’t know if the crowd (or Brundage) was laughing at me or with me, but I don’t really care.  (There’s no such thing as bad publicity, right?)  I think this is the post she means:

Here’s a suggestion, boys: just stop writing about the so-called “Founding Fathers!”Stop it! Stop! Go find something new, interesting, and utterly undiscovered in the archives, for a change!

But then, there have been so many posts to this effect on this blog that it’s difficult to pick just one!

Speaking of which:  you recall my recent discovery that William Lloyd Garrison was even more relentlessly impious about the so-called “Founding Fathers” than I?  Did you know that that bad-assed motherf^(ker burned a copy of the U.S. Constitution in public at an anti-Kansas-Nebraska Act rally in 1854, calling the Constitution itself “a covenant with death, and an agreement with hell?”  I’d like to see a prominent reformer or activist do that today, but so-called liberals and progressives today are a generation of appeasers and go-along-to-get-along-ers.

File your reports from on the ground in Milwaukee in the comments below, you not so bad-assed motherf^(kers.

4 thoughts on “Historiann gets “big laugh” at the OAH, laments the absence of Constitution-burning in today’s politics”