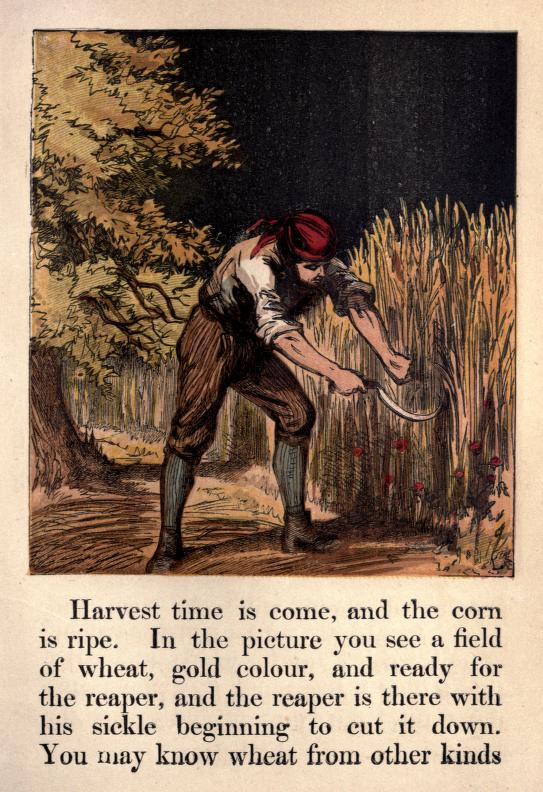 From The Child's Colored Gift Book, with One Hundred Illustrations, (1867)

Aaron Bobrow-Strain got some nice publicity yesterday for his new book, White Bread:  A Social History of the Store-Bought Loaf, which according to Amazon will be released tomorrow.  Bobrow-Strain’s subtitle suggests his focus, which is really on the past 100 years and the invention of the mass production of factory-baked loaves.  In an interview with NPR on Weekend Edition Sunday, he made the point that “white bread was a deeply contentious food — ever since the early 1900s’ ideas of “racial purity” up to the counter-cultural revolution of the 1960s. . . . . White bread first became a social lightning rod with the Pure Foods movement of the late 1800s. Bobrow-Strain says well-meaning reformers were concerned about a host of legitimate food safety issues, and their activism led directly to many of today’s food safety laws.  But food purity ideals bled into the social realm in the form of what Bobrow-Strain calls “healthism” – the idea that “perfect bodily health was an outward manifestation of inward genetic fitness.”

Fans of Laura Shapiro’s Perfection Salad:  Women and Cooking at the Turn of the Century (1986; 2009) will likely be familiar with the earlier parts of Bobrow-Strain’s narrative, from what I can tell from the promotional materials–I’m glad to see that Shapiro’s book has been reissued and perhaps thereby brought to the attention of younger scholars.  (I tried but failed to find even a table of contents for White Bread online–I guess we’ll have to wait until the book is officially published to “look inside,” as the Amazon feature suggests. . . )

Bobrow-Strain is not a historian, but rather an Associate Professor of Politics at Whitman College, and he holds a Ph.D. in Geography and other degrees in Latin American Studies International Studies.  White bread–or to be more specific, raised loaves made of refined wheat flour–has a much longer and more interesting early American history, and one that marries well with Bobrow-Strain’s arguments about white bread and racial purity.  Historians Martha Finch and Trudy Eden have argued about how belief in the humoral body and its vulnerability to its environment heightened English colonial anxieties about how the New World might affect English bodies, and Eden and scientist Heather Trigg have argued that food was a powerful symbol of cultural and class identity.  Their work demonstrates that English and Spanish colonists alike had particular affinities for wheat bread (versus Indian corn bread or tortillas) because they saw food as powerfully expressive of their ethnic identities and/or harbored anxieties about eating New World native foods and how they might change their bodies and identities.

Anxieties about food security, ethnic identity, and the possibility of racial mutability were not just intellectual curiosities, but rather as historians Virginia DeJohn Anderson and Katherine A. Grandjean have demonstrated, they were frequently powerful inducements to initiate violent conflict between English colonists and their Indian neighbors.  So based on my review of the following bibliography of the history of food in America, I would argue that white bread was always about racial purity and integrity, from the first imported wheat grown and ground into flour.

A selected bibliography on food and the environment of early America:

24 thoughts on “White bread, racial purity, and the longue duree”