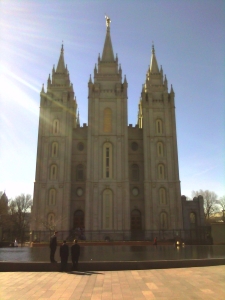 Thinking about that thread on LDS post-mortem baptism of people of other faiths left me wondering:  did some of the angry commenters actually know what Morman post-mortem baptism entails?  I knew all along that there is no use of human remains, no disinterrment, no visitation of graves, and no involvement at all of the baptisees and their families.  If this kind of thing were central to the ritual, then I would share the outrage that some expressed at the practice.  Perhaps people really thought there was some kind of involuntary conscription involved that went beyond uttering someone’s name while a live Mormon undergoes a symbolic baptism on behalf of the baptisee?

Well, don’t take my word for it–take the word of Elna Baker, probably one of America’s most famous Jack Mormons.  She describes the Morman post-mortem baptism ritual, and why someone’s body must actually be immersed in a “water vault,” in a podcast from last September 26 on Marc Maron’s WTF.  Click the link and scroll up to about 40 minutes into the program, and the discussion lasts about 4 minutes.  Baker has actually participated in post-mortem baptisms, and answers some important theological questions posed about the practice.  It’s pretty interesting–embodiment plays a big role.

But the bottom line is that the only involvement of the baptisee is that hir name is read in a temple ritual involving only live Mormon believers.  That’s it.  I’m sorry I wasn’t clearer from the beginning about what this ritual entails.