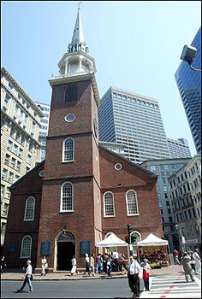 On Wednesday, La Famille Historiann availed themselves of the Downeaster train service from Maine for a whirlwind day trip to Boston.  Because the train took us to North Station, we thought it made perfect sense to pick up the Freedom Trail in the North End and see where it might take us.  Well, friends, we walked it all from Copp’s Hill Burial Ground and the Old North Church, to Paul Revere’s house and the Union Oyster House for a little snack, and then on to Old South Meeting House, King’s Chapel Burial Ground, and all the rest on through Boston Common up to the State House and the memorial to the Massachusetts 54th.  We haven’t lived here since 1997, and a lot has changed over the past 15 years–most notably, the Old Corner Bookstore is (lamentably) a Chipotle.  But, whatever:  Boston is a thriving metropole, and it’s been remaking and rebuilding itself almost since 1630.

Back in the mid-1990s, I was still a graduate student and so never went into any of the attractions on the Freedom Trail that charged admission.  This time we did it all, paying admissions left and right to make up for my previous cheapskatery and also to support the cause of public history in Boston.  Per the conversation going on in the previous post about who or what is a public intellectual, I was struck by comments about the movement to save Old South Meeting House by the 70 year old William Lloyd Garrison in an 1876 letter to his son Wendell Phillips Garrison, which is included in the Old South museum display.  No one can deny that Garrison is a prime example of the best kind of public intellectual in the American grain.  Wendell Garrison, then about age 35, was apparently an advocate for the preservation of the Old South Meeting House, which is commemorated by its museum now as a site of important civic debates and therefore of the liberty of speech guaranteed in the U.S. Constitution.  (He was also the literary editor for The Nation for more than 40 years, nearly to the end of his life.)  Garrison the elder was unimpressed by all of the excitement of the centennial of American independence, and remained an old radical to the end.  (He also made me question my reflexive support for things like historic preservation!)  Here’s Garrison in a letter dated July 21, 1876:

I was none the less gratified to receive your last letter because of its criticisms upon my article in the Independent, and particularly upon my views respecting the preservation of the Old South Church in Boston.  You know that I have always enjoined upon my children to do their own thinking, and never to hesitate in the fullest expressions of dissent from me whenever they should deem me to be in error; and therefore do I commend you in this matter.

Nevertheless, as to my “Centennial Reflections,” as this nation has been the guiltiest of all the nations on the earth since its independence of Great Britain, and as there is no end to the “gush” and “glorification” about its centennial career–the disposition to hide or overlook its criminality being well-nigh universal–I think they were specially called for, so as to rebuke all such blatant folly, and to induce sober reflection.  Too long have “our Revolutionary Fathers” been held up as the noblest of patriots and the truest friends of liberty.  They were too cowardly and too selfish to adhere to the principles they laid down, and, as time-servers and compromisers, they entailed upon their posterity as great a curse as could be inflicted upon any people; and I trust no child of mine will ever fail to recognize their exceeding blameworthiness, or consider a reference to it ill-timed when they are presented for the admiration of the world.

As for the preservation of the Old South Church, I certainly take no special interest in it–(1), because it was erected simply and exclusively as a place of worship (in which kind of worship I do not believe) . . . (2), because two or three incidental gatherings within its walls, during the Revolutionary times, do not and cannot divest it of its sectarian origin, purpose, and history, and do not and cannot make it a temple of liberty, erected for the people’s safety and welfare–(3), because during the whole Anti-Slavery struggle its attitude was conspicuously pro-slavery under the leadership of Rev. Dr. Blagden, who advocated negro slavery as warranted by the Scriptures–(4), because it is parish property, . . . and I am not in favor of having any portion of my taxes go to the purchase of any church or synagogue. . . (5), because I am not sufficiently “sentimental” to take a lively interest in relics of “the Cross,” or of Bunker Hill, or of the corporeal body of George Whitefield at Newburyport, and I have yet to be convinced that they minister aught to piety or patriotism–(6), because when the removal or demolition of an old building is denounced as something sacreligious, the time has come to topple it down, leaving not one stone upon another.  You see, therefore, where I stand in this matter. . . .

Garrison was a true liberal–he wanted his children to think for themselves–but he also has to win every argument, even with the literary editor of The Nation.  Garrison just had to  demonstrate in no uncertain terms the utter righteousness of his position.  Heh.  Resolution for 2012:  must watch that tendency in myself.  As for the so-called Founding Fathers:  I trust no  student of mine will ever fail to recognize their exceeding blameworthiness.

Come to think of it, Christopher Hitchens might have appreciated the elder Garrison’s style–the aggressive impiety about secular “saints” and sectarian worship alike in particular, as well as the refusal to yield the high ground.  But as for who was the worthier public intellectual, Hitchens or Garrison?  I don’t think there’s any contest.