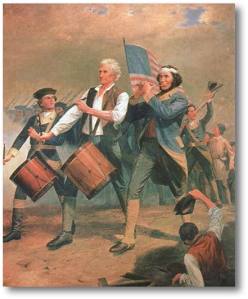 It’s not just that it’s difficult to teach the quintessentially nationalistic course in American history in an era in which a great deal of the historiography is transnational or at least comparative, although that is a challenge for me considering the way I teach the rest of my courses.  It’s really the overwhelmingly nationalistic, solipsistic, chest-beating, flag-waving, screaching bald eagle totality of the historiography.  In the United States at least, there is no more nationalistic course, and no course that is taught in such a one-sided, pro-American manner.  And the students love it!  They demand it, in fact, and they revel in the opportunity to indulge in nationalist agitprop in their essays.

Every course I ever took on the American Revolution–from unreconstructed Whiggy consensus historians to the leftiest of the New Lefties–was unanimous in its judgment that the Americans were right to seek independence from Britain, and American military and diplomatic victories were cheered unreservedly.  The courses differed only in that the the Whig-consensus dudes argued that everything was pretty cool for everyone who counted by 1787 or thereabouts in the land of the World’s Last, Best Hope, whereas the New Lefties focused some attention on the people the American Revolution didn’t liberate:  enslaved people, poor white men, Native Americans, and women of all ethnicities, and pointed out the unfairness of it all that so many were left out of the World’s Last, Best Hope.

Even the U.S. Civil War, which these days is taught in most universities unapologetically with an overwhelming nationalistic Union bias, has a more ideologically diverse historiography.  (It’s not a diversity I particularly respect, the weird little world of the Lost Causers, but it exists.  There is no such thing as a pro-British or even mildly skeptical school of thought on the American Revolution in the United States today.)

So what’s the alternative?  I suppose it could be interesting to teach a course on the American Revolution from the British point of view, except that 1) that would be one week’s worth of material, so little did the colonies in rebellion matter to Great Britain, and 2) questions about British imperial history demand a much more global scope than “the American Revolution” offers.  Like the survey course, the American Revolution may need to have a stake pounded through its heart.