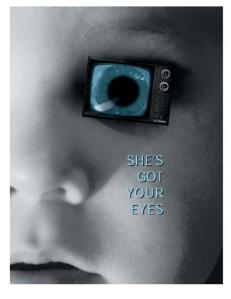 The American Academy of Pediatrics retrenches in its losing war against putting young children in front of screens:

Parents of infants and toddlers should limit the time their children spend in front of televisions, computers, self-described educational games and even grown-up shows playing in the background, the American Academy of Pediatrics warned on Tuesday. Video screen time provides no educational benefits for children under age 2 and leaves less room for activities that do, like interacting with other people and playing, the group said.

The recommendation, announced at the group’s annual convention in Boston, is less stringent than its first such warning, in 1999, which called on parents of young children to all but ban television watching for children under 2 and to fill out a “media history” for doctor’s office visits. But it also makes clear that there is no such thing as an educational program for such young children, and that leaving the TV on as background noise, as many households do, distracts both children and adults.

And yet, we we hear from Jonathan Rees at More or Less Bunk that there is such a thing as online Kindergarten curricula, which he (correctly, in my view) calls “child neglect:”

I actually used the word “neglect” very deliberately there. It’s not abuse to stick headphones on kids and ignore them for a little while. [That’s why we got the minivan with the DVD player installed into the headrest of the front seat.] However, the more time kids spend listening and watching, the less time they get to interact with their peers and their teachers. Neglecting them a little is OK. Building a whole elementary school based on keeping them occupied this way is not. Even if there are no physical bruises, an entirely online education at such a young age will leave them socially stunted in the long run.

I can certainly remember bad days in school:  a kid landing on me at the bottom of a slidey pole and smashing my 6-year old face into asphalt and ice; mean girls ca. 5th-8th grade; being threatened with getting “beat up” after school in junior high.  I don’t doubt that many children suffer greatly from peer bullying and teacher neglect.  But I lament the political consequences of post-Columbine widespread fears that schools are dangerous, psychologically and physically violent places and must be avoided at all costs.

Whenever I have visited our public and private local elementary schools, they seem orderly, calm, and fun places of learning.  I realize that the 5- and 6-year old brain is different from the infant and toddler brain, but the advice about media still applies to elementary schoolers:

Recent research makes it clear that young children learn a lot more efficiently from real interactions — with people and things — than from situations appearing on video screens. “We know that some learning can take place from media” for school-age children, said Georgene Troseth, a psychologist at Peabody College at Vanderbilt University, “but it’s a lot lower, and it takes a lot longer.”

Why on earth would we deliberately choose the lower-impact and slower route to learning in any institutional or homeschool setting when face-to-face interactions with teachers and children are more effective?

28 thoughts on “Teevee not for tots–but online Kindergarten = awesome?”