Jessica Valenti’s discussion of the grassroots feminism on display recently in SlutWalks is pretty good–but I thought she buried one of her more interesting points at the end of the article:

In the past, clothing designed to generate controversy has served to emphasize the message that women have a right to feel safe and participate fully in society. Suffragists wore pants called “bloomers,” named for the women’s rights activist Amelia Bloomer. They were meant to be more practical than the confining dresses of the times. But, echoing the criticism of SlutWalk participants today, the media did not take kindly to women wearing pants. The November 1851 issue of International Monthly called the outfits “ridiculous and indecent,” deriding the suffragists as “vulgar women whose inordinate love of notoriety is apt to display itself in ways that induce their exclusion from respectable society.”

I don’t wade into the toxic swamp of the comments sections of mainstream newspapers, but I’m sure you’ll find even uglier language condemning the SlutWalkers for (some of) their attention-seeking attire.

Valenti also evokes the (historically untrue) spectre of “bra-burners” in her lede, but that too speaks to the symbolic power of women’s clothing in the history of feminism.  This is a history that gets overlooked or ignored because of recent debates in the West over garments-as-oppression for other women–you know, Afghani women in burkhas, or other Muslim women covered by the hijab or la voile.  As though Western women’s clothing has never been an issue in their citizenship or their feminism! 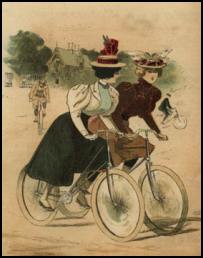 Go read the whole article–I think she’s right that the SlutWalks are a welcome display of young women’s activism.  (Just try to imagine NOW or NARAL organizing a SlutWalk!  Heh.)  They almost recall the in-your-face work of the Guerrilla Girls in the 1980s, but I think the Slut Walk initiatives are even more effective in both making their political point to a wider audience and in radicalizing other young women and men.  And if you want to get in on a discussion of modern feminism–and more specifically, what does being a feminist actually mean?–then go over to nicoleandmaggie’s blog, Grumpy Rumblings of the Untenured, where they ask, “Is there anything wrong with ‘choice feminism?'”  (I think you all can guess what my answer is to that question, but what do the rest of you think?)

46 thoughts on “Material culture, feminist activism, and the future of feminism”