How’s this for a brilliant “feminist” argument:  Peter Beinart urges President Obama to “Put a Mom on the Court!”

And that’s why it’s important not just to have lots of women in positions of political power, but to have lots of women with kids. It’s important because otherwise, the message you’re sending young women is that they can achieve professionally, or they can have a family, but they can’t do both. And without quite realizing it, that is the message our government has been sending. According to the Census Bureau, 80 percent of American women over the age of 40 have children. But look at the women who have held Cabinet posts in the last three presidential administrations. Only two of the Clinton administration’s five female Cabinet secretaries had kids. (Attorney General Janet Reno got her job only after two women with children, Zoë Baird and Kimba Wood, were dinged for hiring illegal immigrants as nannies). In the Bush administration, the figure was two of seven. In the Obama administration, so far, it is two of four. And if Obama chooses Elena Kagan for the High Court, the figure there will be one of three. 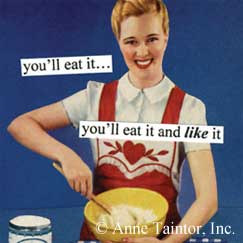 What–you didn’t realize that having all but one non-parent on the U.S. Supreme Court now was disadvantaging women?  Yeah:  that’s why we get teh suckity-suck from the SCOTUS these days:  The Ledbetter (2007) and Gonzales (2007) decisions were all due to the fact that there aren’t enough moms on the Supreme Court.

So much for Ruth Bader Ginsburg’s two kids.  I guess they don’t count!  (Beinart doesn’t acknowledge the fact that she’s a “mom.”  Does he think only premenopausal women qualify as “moms?”)  Sandra Day O’Connor has three sons.  We’ve had a total of three women on the Supreme Court in U.S. history, one of whom (Sonia Sotomayor, appointed just last year) doesn’t have children, and now Peter Beinart’s in a panic to put a “mom” on the Supreme Court.  Srsly.  (Hey–I hear Sarah Palin is available!  How does that sound to y’all?)

Is the fact that Antonin Scalia has nine children the reason his jurisprudence differed so widely from that of his childless colleague, David Souter?  Or could it be that the issue is more complex?  Parenthood is such a widespread experience of American adults, and such a variable one at that, that I’m pretty confident that political and ideological diversity among parents is just as great as that between parents and non-parents.  I personally don’t care whether or not the next Supreme Court justice is a mother, or a father, or not.  That seems to be only of trifling consideration compared to hir judicial philosophy and ideological proclivities.  (Another woman would be great, but I’m not holding my breath.  Women, whether they have children or not, are a historically disadvantaged class of people in the U.S.  Parents are not.)

Besides, if Obama appointed a “mom,” she’d just disappoint us, as all mothers do.  What could one woman do with the SCOTUS we’ve got right now?  And yet, we’d still expect her to clean it all up by herself, and then make us dinner (NOT with broccoli–you know we don’t like broccoli, Mom!)

0 thoughts on “Is motherhood authorizing?”