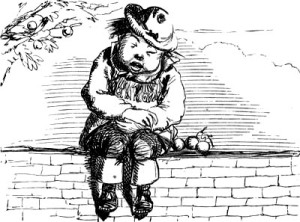 In “Kindergarteners:  YOU’RE DOOMED!!!!” over at Shakesville, Elle writes about a story in the New York Times that raises fat panic to a whole new level.  The Times story claims that “more and more evidence points to pivotal events very early in life — during the toddler years, infancy and even before birth, in the womb — that can set young children on an obesity trajectory that is hard to alter by the time they’re in kindergarten. The evidence is not ironclad, but it suggests that prevention efforts should start very early.”  As Elle observes, “there is always room to blame mamas!”

Indeed, the Times story suggests that uterus and placenta play a malevolent role in fetal development!  (Who knew?)  Saith the Times:  “Many doctors are concerned about women being obese and unhealthy before pregnancy because, as they point out, the womb is the baby’s first environment. . . . The intrauterine environment of a woman with diabetes overnourishes the fetus,” said the study’s author, Dana Dabelea, an epidemiologist at the Colorado School of Public Health. And that, she added, may “reset the offspring’s satiety set point, and make them predisposed to eat more.”  ZOMG!!!111!!!  That might happen, right?  (Like Wayne from Wayne’s World used to say:  “and monkeys might fly out of my butt!”  My bet is that a child’s environment over the course of years–and not just hir mother’s uterus for 8 or 9 months–is more determinative of hir overall health.  But blaming mothers is easy and cheap, whereas ensuring fresh food, access to health care, and clean, green open spaces for every child to play in is expensive!)  Elle points to the historically racial and class dimensions of this rhetoric that suggests that fat mothers are bad mothers:

Given the blame-the-fat-mother meme, we can expect the continued condemnation of poor mothers and black mothers, who are more likely to be fat than mothers in other socio-economic and racial groups. Also, poor mothers might be eligible for programs like Food Stamps and WIC (which will provide infant formula), putting them in a position in which many people feel that their food choices should be scrutinized and judged.

Obviously, this is just what we needed: another way to assess how horribly mothers fail.

And, another way to tell kids, at an even younger age, that they fail, too. It isn’t as if schools or scientists or Michelle Obama are couching their programs or suggestions in any other terms. “Prevention,” “risk,” “epidemic,” etc. Kids are not clueless–even the little ones know when they’ve been judged deficient. To be fat is to be bad and immoral.

As I read through this yesterday–and marveled at the multimillion dollar grants being offered to researchers to investigate childhood obesity at younger and younger ages–I thought about another generation of babies who were doomed before birth:  the so-called “crack babies” of the late 1980s.

Some of you may recall the crack panic of the 1980s, which recycled a lot of other ideas and language from other drug panics in history.  (Remember how it was only one puff that made you an instant addict?  In the 1990s, people said the same thing about Ecstasy and then Oxycodone, and in the 2000s that’s what they say about meth.)  Back in the 1980s, we were also informed that the babies born to mothers who had smoked crack were “crack babies,” babies who were biochemically and neurologically damaged in the womb by exposure to crack (never powder!) cocaine, and therefore were doomed to be of below-average intelligence and to suffer from poor impulse control and various emotional and social problems the rest of their lives.  The message was that one puff by a pregnant woman would render her child a throwaway baby.  (Middle-class, wealthy, and white powder cocaine users were never accused of ruining their children’s health, and I’m unaware of any middle-class or rich white women whose children were taken away from them because of their drug use.)

Well, we all know now that “crack babies” were a myth.  (In fact, you can read it in The New York Times!  In the very same pages that are now telling you that fat women are ruining their kids’ health even before they’re born.)  FAIRblog explained last year when the Times story was published debunking the “crack baby” myth:

The despicable role played by the press corps is why the Times story feels not just too late but too little. The paper reports “there were widespread fears that prenatal exposure to [crack cocaine] would produce a generation of severely damaged children,” and goes on to cite inflammatory headlines as if they were merely reports on those fears, rather than the means of their creation. The truth is there would be no “crack baby” storyline if not for the zeal with which many in the press corps seized upon limited, qualified medical research as an excuse to at least entertain the idea of writing off huge numbers of overwhelmingly black and poor children. (Though the research pertained to cocaine in all forms, the story was always about crack, wasn’t it?)

It wasn’t a medical researcher who wrote, “The inner-city crack epidemic is now giving birth to the newest horror: a bio-underclass, a generation of physically damaged cocaine babies whose biological inferiority is stamped at birth”; it was the Washington Post‘s Charles Krauthammer (Washington Post, 7/30/89). Krauthammer had American Enterprise Institute media darling Douglas Besharov to thank for the term “bio-underclass”, and Besharov wasn’t shy about spelling out the wished-for social repercussions: “This is not stuff that Head Start can fix…. Whether it is 5 percent or 15 percent of the black community, it is there.” Being violently wrong doesn’t appear to have dimmed Besharov’s media star; nor should we hold our breath for any apologies from Krauthammer for telling readers, “The dead babies may be the lucky ones.”

I wrote here last month about the disturbing similarities in the rhetoric of cleanliness, civic virtue, and individual moral worth at the turn of the nineteenth century compared to our modern rhetoric about fat, virtue, and morality.  It looks to me like the popular media are just refreshing another stereotype and, replacing “crack” with “fat” to blame women–especially poor women–for deploying their uteri against their children yet again.  As the FAIRblog said about the “crack baby” craze,

The saddest part: Early on, researchers recognized that the social stigma attached to being identified as a “crack baby” could far outweigh any biological impact. The Times piece underscores that, with a source who says, “Society’s expectations of the children and reaction to the mothers are completely guided not by the toxicity but by the social meaning” of the drug.

But it seems as though journalists are no more likely now than they were then to examine what it is about their own practices that would drive them to perpetuate such a “social meaning” when it was not supported by science and when its potential effects were so devastating.

0 thoughts on “Fat is the new crack”