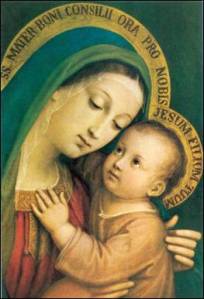 Historiann friend and commenter Rad Readr passed along this obituary for Mary Daly, which puts her academic career and struggles at Boston College front and center.  I’ve been thinking a lot about Daly and the remarkably brave stands she took in her career as a feminist theologian at a Jesuit college, especially as a feminist who although not Catholic has taught at two different Catholic universities in my (still relatively brief) career.

As this article suggests, women at Catholic institutions still struggle for tenure and to make their mark on these schools.  The linked article reports that at DePaul University this year, seven out of 33 tenure applicants were denied, and of those seven, five were women, including (for example) a women’s studies professor who was asked by the tenure review board how many men enrolled in her classes.  This is eerily significant, especially since Daly’s “retirement” was precipiated by a final showdown with BC over her policy of refusing to admit male students to her classes.  (H/t to Fannie of Fannie’s Room for sending the DePaul article on to me.)  The gender breakdown is pretty stark when you look at who was tenured at DePaul:  16 of 18 male applicants were successful (88.9%), whereas only 10 out of 15 women applicants won tenure (or 66.7%).

I haven’t written about my experiences at Catholic universities before, because my research right now focuses on a Catholic religieuse in the eighteenth century, and I’m loathe to give voice to anything that might be interpreted as breathing life into anti-Catholic stereotypes, especially since I’m not a Catholic myself.  Part of my first book and recently published work is an exploration of English and Anglo-American anti-Catholicism in the eighteenth century, which was not just rhetorically vicious but sometimes literally murderous.  I’ve come to really admire the early modern version of the institution because of the different roles and opportunities it preserved for women in Catholic countries.  Also, I think the traditionally protestant and male-centered Anglophone history of education has systematically left out the vital importance of Ursulines and other Catholic women religious in the history of the education of girls and women–but I digress.

Because I’ve taught at two different Catholic institutions of higher education for a total of 5 years–although neither of them were Jesuit, they were founded by or closely associated with men’s religious orders (Paulists and Marianists)–Daly’s struggles at BC resonate with me, and I wonder if they resonate with some of you who were or currently are affiliated with Catholic schools.  I’ve had my struggles as a woman and as a feminist at both private Catholic and secular public institutions, and in fact, at my last Catholic employer, the priests (and one nun) I worked with were the most reasonable, open, fun, and intellectually lively people I knew there.  (As it happened, the people who were hassling me were mostly secular protestants who were unhappy in their work and resentful of the Catholic identity of our employer.)  So, I don’t want to suggest that Catholicism necessarily equals antifeminism or antiwomanism–it’s clearly not that simple at all.

But, when I went to teach at a Catholic university, it was the first time in my life where I felt invisible, marginal, or just beside the point as a woman.  On a fundamental level, I got the feeling that I didn’t really exist in the Church’s world of male clergy and masculine hierarchies.  It was strange, because as a young secular feminist from a protestant background in the mid-1990s, I had always conceived of patriarchy as something that men do to women (for the most part, although my own work investigated how patriarchy was something that everyone does to everyone else, although it results in different outcomes.)  That is, I thought that sex discrimination was an intentional effort by one person (or an institution) to interfere with another.  But, working at a Catholic university, I understood that there was another way that patriarchy works, and that was as a system that ignored or denied the existence of women.  It’s hard to explain specifically how this worked–although I suspect that if you’ve ever had the experience of being a minority amidst a large working majority who has most of the power, you might be able to relate.  (Just one small example:  the “women’s room” in my academic department still had a urinal installed in it, although the university had been coeducational since the 1920s.)

At the second Catholic university I taught at, which was also coeducational since the 1920s, my office was in a new building, so the women’s room didn’t have 70+ year old vestigial urinals in them.  But, there was an emphasis on obedience and deference there that I’ve never felt anywhere else–I should say too that everyone was expected to obey and defer, not just women, but since women occupied none of the higher administrative positions in the university, well–you can guess how that worked, with women clumped in the lower ranks as contingent faculty or Assistant Professors.  The few senior women faculty were isolated from one another, and were even hostile to each other.  For a university that rhetorically compared itself to a family or a close-knit community with shared values, that wasn’t my experience of the place.  Everyone in my department–men and women–had been damaged by the tenure process and by each other, so they were fearful and protective of themselves, and unable to be generous to others.  (There were a few exceptions, for which I was grateful, but it wasn’t enough.)

In an echo of BC’s and the DePaul tenure board’s deep concern that male students weren’t being served by feminist faculty, I was told that my service on the Women’s Caucus, to the nascent Women’s Center, and to the Women’s and Gender Studies Program there wasn’t regarded by my colleagues as “legitimate” service to the university, but rather as “self-service.”  That is, although I was hired as the American women’s historian, it wasn’t enough for me to focus my service work on women’s groups or issues.  What I thought was a reasonable way of managing my service load by engaging in activities that supported my intellectual and pedagogical agenda was read as self-serving.  Mind you–none of my activities were gender-exclusive, and we never chased away men.  But my service was concentrated in activities that were called “women’s” this or “gender” that.  (If it wasn’t all about teh menz, it was necessarily suspect, as at DePaul and BC, I guess.)  I learned there to be wary of that rhetoric of family and community–it’s usually only hauled out when the administration wants to extract more unpaid labor from its employees, but if you’re a student who has been raped by another student, or if you’re a junior faculty member whose career is in jeopardy–well, so much for relying on your “family.”  Some members of the “family” were there to serve, others to be served, and that was a rigidly gendered distinction.

So, in the end, that’s why I appreciate Daly’s career.  Hers was a lifelong struggle to make the point to the Church and its hierarchy and institutions that women exist, not as imperfect men, not as problems to be managed, or as people who should always step aside to serve men.  I see her decision to keep male students out of her classes (although she offered to tutor them individually) as her protest against the invisibility and marginality of women in the Church and in Church institutions.  Ultimately, as the linked obituary says, she gave up on the Church, but she kept up her struggle for the visibility and importance of women at BC.

Finally, a little fun:  Liz Phair’s song “6’1″” came up in a thread at Clio Bluestocking’s place recently, suggested by Notorious Girl, Ph.D.  Here’s another song by Phair I used to scream at the top of my lungs in my car on my commute to and from my previous university.  It’s called “Help me Mary,” also from Exile in Guyville (1994).  It was originally written about a bad roommate and her horrible friends, but I thought it said a lot about my department and work situation at the time.  (“I practice all my moves, I memorize their stupid rules/I make myself their friend, I show them just how far I can bend.”  The song ends with a plea that her disgust for her antagonists turns to “fame/And watch how fast they run to the flame.”)

What are your experiences at Catholic universities, or other sectarian schools?  Do you exist yet?

0 thoughts on “Women in Catholic higher ed: do we exist yet?”