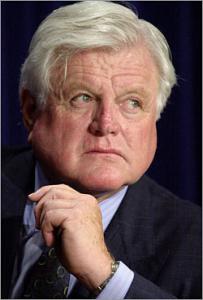 Massachusetts Senator Ted Kennedy died last night, as I’m sure you’ve heard already–I heard it as I lay sleepless this morning about 3 a.m. Mountain Daylight Time on the BBC.  Interestingly, the Beeb was much more eager to talk about Kennedy’s failures and flaws than the U.S. media I’ve seen and heard so far this morning.  NPR has eulogized him with paeans to his legislative record and his family history, and has steered clear of the famous scandals.  In an interview with Christopher Hitchens, a BBC  interviewer kept pushing him to address Kennedy’s spectacular flameouts and criminal actions–his ill-fated challenge to President Jimmy Carter for the Dem nomination of 1980, and the 1969 car crash that caused the death of Mary Jo Kopechne, a young Bobby Kennedy volunteer, at Chappaquiddick on Martha’s Vineyard.  Hitchens’s sensible although vague reply was, “we are not entitled to ignore his flaws.”

Kennedy was a very flawed man–but you Christians in the audience, particularly if you’re of the Calvinist stripe, believe that we’re all deeply and essentially imperfect.  I lived in Massachusetts in 1994-95 and again in 1996-97, and voted for Kennedy in his rough re-election campaign against the young, handsome, and popular moderate-to-liberal Republican newcomer, Mitt Romney.  (This was long before his personal Conservative Revolution of the mid-2000s, but in the 1990s he said he supported abortion rights.)  1994, if you’ll recall, was just 3 years after the Palm Beach rape trial and acquittal of Kennedy’s nephew, William Kennedy Smith.  Various witnesses to the events of the night of the rape reported that the Senator was partying hard with his young relatives, and wandering around without his pants on.  The Senator was even called to testify.  Rumors about Kennedy’s drinking were legion in Washington and Boston as well as Palm Beach.  When it looked like Romney could actually beat him, he cleaned up his act, lost weight, and got married again, to Victoria Reggie.

The men in the Kennedy family had always used and abused women as they saw fit, as have wealthy and privileged men throughout history, and they’ve left not just private injuries behind them but several deaths as well.  His brother John carried on multiple affairs and sexual dalliances before and during his short Presidency, many of them brutally exploitative.  His father carried on affairs while his mother tended to their nine children, and his brother Bobby was also rumored to be a womanizer.  His nephew John F. Kennedy, Jr., killed himself, his wife and his sister-in-law in an airplane he piloted in 1999, on the way to a family wedding on Cape Cod, and his other nephew Smith (mentioned above) was tried for a brutal rape.  Ted Kennedy alone bears the responsibility for the death of a young woman forty years ago.  And yet, as a radical feminist, I happily cast my vote for him in 1994.  I wasn’t voting for my Husband, or for my Pope, but rather for my Senator.  I cared about how well he would represent my interests in the U.S. Senate, and he was famously and reliably the “liberal lion.”  His name and his safe seat gave him the luxury of being true to his beliefs throughout his career, and his 46 years in the Senate made him one of the longest-lived master players and power-brokers in Washington in the past half century.

It would be nice, as a feminist woman who is friends with and related to a lot of women and girls, if our male political allies didn’t treat women in their personal lives as disposable objects or toys for their own pleasure.  It would be nice if they stayed home and read a book instead of catting around with women half their age (or less).  But, I was better represented in Congress by Ted Kennedy than I have been by the other men and (a few) women who have been my Senators and congresspeople, who although they may be faithful to their spouses don’t stand for the same principles of personal liberty and civic compassion that Senator Kennedy stood for.

UPDATE, later this afternoon:  See Knitting Clio for a nice roundup of links–thanks, KC!  Here’s Sean Wilentz’s evaluation of Kennedy’s life and political career, and here’s Ted Sorensen’s reflections on “The ‘Kid Brother’ Who Grew Up.”  Sorensen is of course himself one of the last remaining survivors of “Camelot.”  It feels like the end of a half century of American political history.  What do our students know or think about Ted Kennedy, or the Kennedy family in general?