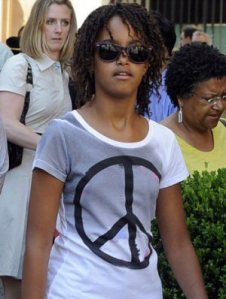 Remember Lessons for Girls?  Well, Roxie, the terminally ill Wire-Haired Fox Terrier got busy living this week enough to make a contribution to our files.  Her advice, inspired by Malia Obama’s peace sign tee-shirt, is very simply that “[y]ou are not what you wear, even if everyone around you is obsessed with what you happen to have on, so wear what you want and to hell with what anybody says.”  Furthermore, “[i]f people are staring at you, stare back — fiercely, beautifully, directly.”  Well said, Roxie–especially for a girl who probably has only limited experience with clothing, outside of those undignified Halloween getups some humans make their pets wear.  (I’m not judging–hey, I tried to put a tiny Pilgrim hat on one cat and an Indian headdress on another last fall–I’m just saying.  Cat Thanksgiving tableau?  EPIC FAIL!)

I especially like that second part about returning the male/public gaze.  Dog knows that Malia Obama has had more of that than most of us get in a lifetime, although while she’s under Secret Service protection, she’ll probably be spared some of the cruder and uglier comments about her appearance than many of us have heard screamed at us on the street (although not in newspapers, magazines, on TV, or on the non-peer reviewed world wide timewasting web, sadly).  Back when Historiann was a young and carefree mere slip of a cowgirl in Philadelphia, she was truly shocked at some of the things that men would say to her on the street, especially when she was on her morning run.  “Hey, baby, you’re looking tight today!” was one of my favorites.  Can you imagine?  Historiann was not dressed to impress–she was unshowered, sweaty, in baggy shorts and a tee-shirt, and hadn’t even brushed her teeth yet! 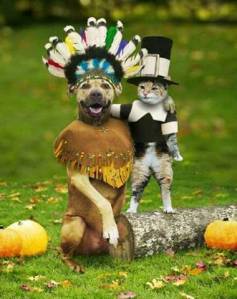 A crime against nature

For a while, I did what I was taught to do–“just ignore it.”  But when you hear this kind of crap, day after day, ignoring it doesn’t do anything for you–it just gives people the idea that it’s OK to continue to yell nasty things at women, and it makes you angry and frustrated that your silence isn’t interpreted as quiet dignity, but as acceptance.  So I decided to talk back:  I would stop and slowly repeat the phrase or expression someone had just yelled at me (“Hey.  Baby.  You’re.  Looking.  Tight?  ToDAY?”), and then ask, “do you kiss your mother with that mouth?  Do you want someone talking to your wife or daughter like that?”  A few times I got angry responses, but most of the time the men backed down and even (sometimes) apologized.  “Hey, I just thought you look good–I didn’t mean anything by it!”  Yeah, right.  Well, whatever.  I’m sure they didn’t consciously mean anything other than, “I can say whatever I want about you, your body, and what I’d like to do with it, and you can’t do anything about it!”  Nothing personal.

Well, pal–this is a concealed-carry state, and I’ve got a blog.  You gotta ask yourself a question:   Do I feel lucky?  Well, do ya, punk?  Thanks, Roxie!  Love Ya!  Live, damn you, LIVE!