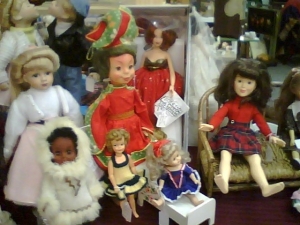 I’m back in vintage doll heaven in Michigan–and by “heaven,” I mean “my parents’ garage and the local antique malls.”  (And by “antique malls,” I mean “somewhat better than garage sale stuff!”)  So here’s a selection of the fun, freaky, and just plain “why?” that I came across today in just one booth in one antique mall.  I apologize that some of the photos are a little blurry–I had to photograph some of these things through a glass case.  Abundant pleasures await you!  For example, next to the Eskimo doll is a Pepper doll with a crocheted dress in gold yarn with green trim.  Lots more, and more of the weird, on the flip!

First of all, those of you gens d’un certain age will remember the fabulous Joey Stivic doll, more popularly advertised as “Archie Bunker’s grandson,” who was the first anatomically correct baby boy doll in the 1970s.  Scandalous!  I didn’t open the box, but I rattled it so I’m fairly certain l’il Joey is still in there.  I never wanted the Joey Stivic doll–after all, I had an anatomically correct little brother of my own–but I remember that he was an object of tittering fascination among the under-9 set back in the day.

Next, for all of you TV fans, there was the Angela Cartwright doll from the Danny Thomas show, Make Room for Daddy.  I was reliably informed by my mother, who is an expert in TV history, that she played his youngest daughter in that 1950s and 60s TV show.  Fans of 1960s shows (or re-reuns in the 1970s) will remember Cartwright as the intrepid middle child Penny Robinson on Lost in Space.  (I think her costume in Lost in Space was a little more memorable than this one.)  Did anyone else think that the Robot should have ditched that dithering queen Dr. Smith and dopey Will Robinson to hang out more with Penny?  Maybe it was just me…

Now this one is a classic in the “found art” category:  someone long ago fashioned a hand-made tiny habit, complete with a cross at the waist, to make hir own nun doll.  Think you recognize that face?  I bet you do–it’s a Kewipie Doll!  This one is the runner-up for the “Why?” prize, I think.

I would now like to present the winner for the “Why?” prize:  Oreo Barbie.  Yes, that’s right, she’s an African American doll.  Go figure.  The “why?”s are just too numerous to list:  Why would Oreo cookies sponsor a Barbie?  What Mensa candidate dreamed this one up?  We’d be here all afternoon, friends–you can leave your ideas in the comments below.

Finally, I’ll leave you with another graven image of my favorite category of dolls:  the creepy disembodied head.  This one is very strange, because it’s not just a head that was popped off of an old doll body.  Somone custom-made a wooden base for it and glued it on–someone who’s obviously a kindred spirit of mine!  There she is, along with the souvenir ashtrays and glass candy dishes.  Awesome!