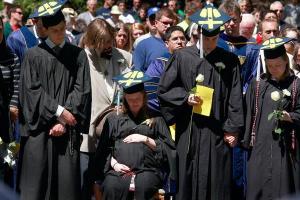 Via Religion in American History, I found this brilliant essay by Georgetown political theorist Patrick Deneen, “Abortion and Catholic Culture.”  He argues that the fracas at Notre Dame over President Barack Obama’s appearance at graduation yesterday because of his position on abortion is a rear-guard action which,  “along with the opposition to gay marriage – this issue represents the last stand, the inner-most wall barely keeping the hordes from overrunning the sanctum.”  He continues:

The ferocity over [abortion] – and this issue almost to the exclusion of nearly every other issue that might be part of a rich fabric of Catholic culture – suggests to me that Catholic culture, where it existed, has been largely routed. And, in fact, it suggests further that it is precisely for this reason that this issue has become largely defined politically – and not culturally – with an emphasis on the way that the battle over abortion must be won or lost at the ballot box (and, by extension, Supreme Court appointments).

Why does Deneen think that abortion politics represents an end-game for conservative Catholics?  Because there is no such thing as a Catholic culture in the United States, and American Catholics are full participants in late capitalism’s culture of “choice” writ large:  materialism, individualism, hedonism, and mobility.  In other words, “American Catholics have largely assimilated into mainstream American society, and come to seek success and approval from that culture on its terms.”

A culture – Catholic or otherwise – that regarded abortion as well-nigh unthinkable would be profoundly different than the one we inhabit. First, such a culture would foster a strong sense of place. This is one of the central features of Catholicism, in strong distinction to Protestantism: we are members of parishes, which are located where one lives, and not according to the choice of minister or music or fellow churchgoers. . . .

Did you catch that dig at Protestantism?  Well, much of the scholarship on (in the words of one scholar) “the Democratization of American Christianity” supports Keenan’s thesis:

Catholicism is a religion of memory and tradition. . . . Most of us, however, are in living arrangements where the dead are kept distant and apart from us – just as we separate all of the various aspects of life, disaggregating shopping from work from recreation from home. And even in the home, we are likely to be texting or emailing Facebook “friends” or hanging on the edge of our seats to see who gets kicked off American Idol. Much of the time, we are not even home when we are home.

A Catholic culture would inculcate a certain kind of character: one of respect, self-restraint, responsibility, humility, thrift, moderation, self-sacrifice. Courtship and marriage would be encouraged among the young. Divorce would be well-nigh non-existent. Such a culture would not valorize materialism, but understand that things of this world is not to be wholly embraced. At the heart of our culture would not be – as Jody suggests – opposition to abortion – which is, after all, negative – but rather the things that abortion is not: family, Church, community, memory, tradition, continuity of past, present and future. Culture is affirmation, not simply denial.

A good friend of mine who is a historian of American religion used to make the same argument about protestant evangelicals.  His point was that it wasn’t feminism, homosexuality, or abortion rights that threaten the “American family” (in the fervid imaginations of the late Jerry Fallwell and the still-living Pat Robertson)–it’s the materialism and the shallowness of American culture.  But–their homes have cable TV, their children are subjected to the same pornified trash culture, two things that have more to do with advanced capitalism than with any authentic feminist or progressive ideals.

Our culture is driven by a different ethic altogether: mobility, markers of material or political success, a fetish for technological innovation and distraction, a media that is almost wholly visual and which portrays no past and no future (Read Postman’s Amusing Ourselves to Death, especially his chapter “Now, this…”), a valorization of choice in ALL things hourly reinforced by advertising that is ubiquitous and insidious. Our culture is one in which previous generations are forgotten – an acceptable price of progress – and even the relationship of parents to children is either chummy friendliness or marked by the knowing sarcasm and irony of youth toward obsolescence (just watch an hour of the Disney channel for confirmation). The abortion of children is to be expected as a consequence of THIS culture: in a culture in which I define my own future in accordance with will and desire, and in which that which is personally inconvenient to me is as disposable as most everything else I use for my convenience everyday, sex is a consumer product and abortion is the trash. Disenchantment and utility defines my relationship to ALL things, in the end.

Yes, yes, and an extra “hells” to the “yes” on the Disney Channel!  I understand and respect Deneen’s perspective in the last half of the paragraph, although I disagree in the end with his judgment about abortion.  I’m adamantly pro-choice on the basis of other values, namely, the Fourth, Ninth, and Thirteenth Amendments to the U.S. Constitution.  Catholics and others who oppose abortion can create a true “culture of life” without the coercive arm of the state.  Moreover, I’m reflexively skeptical of religions that don’t expect the same denial of individualism among men that they do among women.  (Perhaps Keenan would agree with me on this point–I’m not singling out Catholicism here.  I think this is true of the vast majority of organized world religions.)

Besides–campaigning against the rights of other Americans is not a winning political strategy–look at what happened to proslavery advocates, to supporters of Jim Crow, and those who opposed women’s suffrage:  they’re neverthe heroes in the history books–they’re seen as the embarrassing obstacles to history itself.  The broad theme of American history is the expansion of the rights and responsibilities of citizenship, not their restriction.